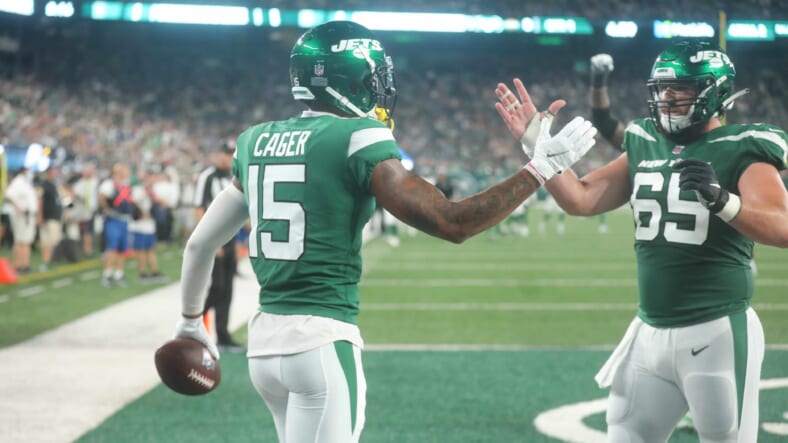 Cut down day for the 2022 New York Jets is complete, for now. The roster has been curtailed from the 80 to required 53 players. Still, some possible transactions at the bottom of the roster can come about.

The Jets let some expected final roster players from the fans go. Tough calls were certainly made. In the next 24-48 hours, the Jets could potentially look to add particularly at safety, offensive tackle, defensive tackle, or elsewhere. A trade including wide receiver Denzel Mims could come to fruition shaking things up in terms of how the roster rounds out. Nonetheless, let’s take a look at the 2022 Jets initial 53-man roster.

The Jets had to let Chris Streveler go. As well as he performed with a limited amount of reps, the Jets’ top three quarterbacks were virtually set. It was a tough room to compete in. Now, the question becomes whether or not Streveler gets claimed or makes it through waivers for the Jets, which is likely not going to be the case.

The Jets waived roster hopeful Calvin Jackson who showed some intrigue this summer. He could be brought back on the practice squad. The big question here now is whether or not a deal strikes with another team for Denzel Mims.

Second-year player Kenny Yeboah and fourth-year Jet Trevon Wesco were let go. Roster hopeful who shined in the preseason, Lawrence Cager, did more than enough to make the team. This position group is vastly improved for the Jets.

The surprise up front offensively was the last-minute release of Chuma Edoga. Whether or not the Jets add another backup tackle along with Max Mitchell will be worth monitoring over the next day or two.

The two tough decisions here were waiving Bradlee Anae and Jabari Zuniga. Veteran Vinny Curry makes it in somewhat of a shocking fashion after missing some time.

The Jets released 2021 sixth-round pick Jonathan Marshall as well as Tanzel Smart. Ideally, one, if not both, make it through waivers without being claimed, and the Jets can keep them both on the practice squad. Marshall, in particular, has a ton of athletic traits worth sticking with.

The Jets go with just four players at linebacker. Core special-teamer from a year ago in, Del’Shawn Phillips, veteran Marcell Harris, and 2021 sixth-round pick Hamsah Nasirildeen were all released. Phillips and Nasirildeen are both young and could be brought back on the practice squad.

One of the bigger surprise cuts was third-year slot cornerback Javelin Guidry. Ultimately, the Jets did not want to keep seven cornerbacks. Perhaps, Brandin Echols now becomes Michael Carter II’s backup in the slot. Justin Hardee will remain a catalyst on this special teams unit for Brant Boyer.

Two big shocking cuts were 2021 fifth-round pick Jason Pinnock and veteran Will Parks, who performed well this summer. On the other hand, it was certainly surprising to see Ashtyn Davis and Tony Adams both make it initially. Davis ultimately has developmental athletic traits and can contribute on special teams. Adams, the rookie undrafted free agent, not discussed a ton, clearly impressed the Jets brass.

These three specialists for the Jets have been set in stone for some time.