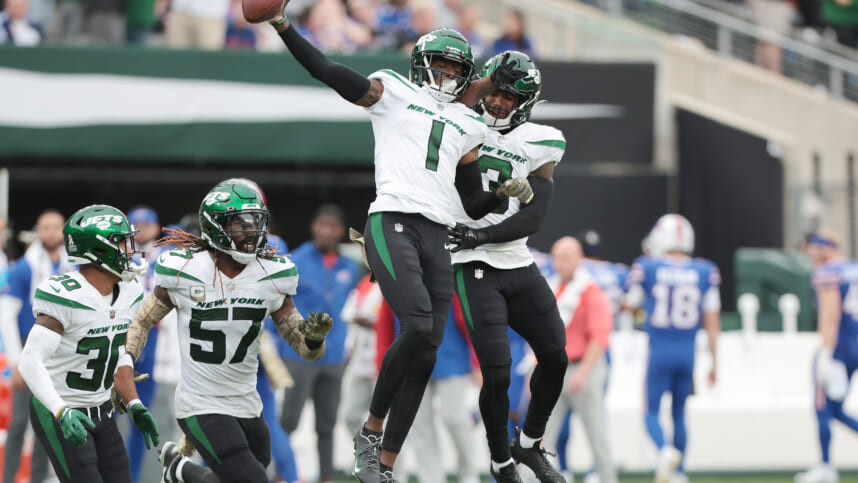 Sunday’s outcome was disappointing for none more than the New York Jets defense. After being on the field for 35:30 of the game, the unit still held their opponent to 297 total yards of offense and just three points.

As has been the case all year, whether it be against the run or the pass, the defense was stout. Starting with the run game, the Jets bottled the Patriots up to 3.8 yards per carry. They limited Rhamondre Stevenson to 15 carries for 26 yards (1.7 per rush). Against the pass, the Jets had a ridiculous six sacks and eight quarterback hits, allowing 246 yards despite being on the field most of the game.

The unit picked up an impressive eight tackles for loss. They held the Patriots to 4-15 on third down (26.7%) and had a fourth down stop as well.

Situationally, the unit stepped up with splash plays when needed. On multiple occasions, when the Patriots had the ball in Jets territory, on the cusp of points, the Jets delivered with, for the most part, timely sacks. That shows with the Patriots’ 0-2 red zone efficiency. The opportune sacks also show up with the two missed field goals by Nick Folk from 44 and 43 yards. One drive was inside the Jets 20, the other, the 22 yard-line.

Aside from getting the one turnover that would have probably led to a win, the Jets’ defense did all that it could to take this game. To highlight their great success, let’s take a look at where they rank across the league in various key categories.

Starting with the terrific front, the Jets are led by the likes of Quinnen Williams, John Franklin-Myers, Carl Lawson, Sheldon Rankins, Jermaine Johnson, and Bryce Huff. Following Week 11, the Jets’ run defense is ninth in football. They are allowing just 109.7 yards per game. The run defense of the Jets is giving up, on average, four yards per carry, an amount that places them tied for the fifth-best in the league.

When it comes to rushing the passer, the Jets have 32 sacks, which is tied for the fourth-most in football. On a per-game average, the Jets are totaling 2.9 sacks.

Aside from pass-rushing dominance, the Jets’ back seven has been fantastic in coverage. Great contributions have come from many players. Whether it be Sauce Gardner, DJ Reed, Michael Carter II, Jordan Whitehead, C.J. Mosley, and Quincy Williams, among others, the Jets currently have the 10th-ranked pass defense in the NFL, allowing 200.8 yards a game.

They have the 10th-best completion percentage allowed to quarterbacks, at just 63.2% per game. The pass defense is allowing 5.9 yards per attempt, which ranks tied for fifth in football. The Jets’ pass defense has allowed just nine touchdown passes, which is tied for the second-best.

When it comes to interceptions, the Jets are tied for the fourth most in the league with 11. The 14 total turnovers the unit has place them tied for ninth in football.

Overall, the Jets’ defense ranks eighth right now, averaging 310.5 yards allowed a game. It is worth noting if the time of possession in a few games could be more in their favor, they would likely rank even higher. When it comes to points allowed, the Jets have the ninth-best scoring defense, giving up 18.6 per week.

All in all, whether you review the talent or the numbers, the Jets have a special defense. To rank in the top 10 of all the many (11) stats listed above is beyond impressive. This Jets defense is undeniably the catalyst to this football team finishing the year strong and making the playoffs.