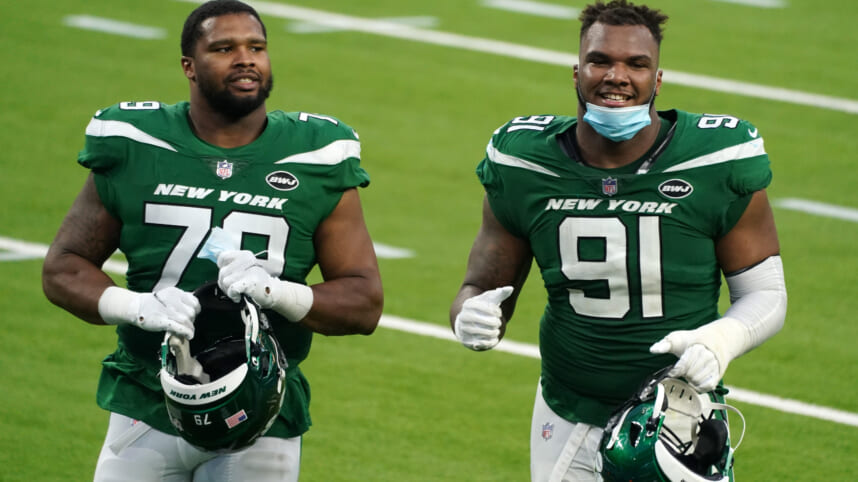 With three weeks of training camp and a preseason game in the books for the New York Jets, roster decisions are on the way. The team will have to make its first five releases by 4 P.M. this afternoon. Two weeks from today, the roster will be down to 53 players. With that being said, let’s take a look at a few Jets’ final roster hopefuls who have helped their chances.

Arguably the top player to help himself so far is Tanzel Smart. He has been with the Jets since October 2020. Last summer, Smart played well in the preseason. It led to him staying on the practice squad throughout 2021. In the first preseason game last week, Smart picked right back up where he left off. He had two sacks and six total tackles in Friday night’s game.

The Jets have some unknowns with their depth at defensive tackle. After Quinnen Williams, John Franklin-Myers, Sheldon Rankins, and Solomon Thomas, there is a chance for Smart to take a roster spot. He is battling with two players in, Nathan Shepherd and Jonathan Marshall.

The Jets drafted Jabari Zuniga in the third round of the 2020 NFL draft. At the time, he was a bit of a raw, developmental prospect. He had no offseason and missed the beginning of his rookie year with an injury. Last year, he did not survive final cuts but was ultimately retained on the practice squad.

With the Jets having so much talent and depth at edge, it led to someone like Zuniga flying under the radar. The Jets have Carl Lawson, Jermaine Johnson, Jacob Martin, Bryce Huff, and Micheal Clemons. Nonetheless, Zuniga has had a strong camp and showed up in the first preseason game with a sack and six total tackles.

The position change for the big 6-foot-5 target from wide receiver to tight end has gotten off to a good start. Lawrence Cager drew some buzz throughout the offseason program in OTAs. In the first preseason game, he was the Jets leading receiver.

Cager finished Friday with two catches for 40 yards showing his speed and explosiveness after the catch. He has the athletic ability to be a difference maker at tight end. Currently, for the Jets at tight end, Tyler Conklin, CJ Uzomah, and Jeremy Ruckert are all final roster locks. From there, Cager is in a tough battle with Trevon Wesco and Kenny Yeboah, which looks to be a fascinating one.

Since his rookie minicamp tryout in the spring, Calvin Jackson has garnered some good buzz for himself. It carried over into the first preseason game. Jackson caught two of his three targets for eight yards and secured the game-winning touchdown. Jackson may have a chance to be the Jets’ sixth wide receiver behind Elijah Moore, Garrett Wilson, Corey Davis, Braxton Berrios, and Jeff Smith.

Will Parks was a late sixth-round draft pick back in 2016 who has carved out a nice career for himself. For the Jets, he provides veteran experience and leadership to the safety position.

Parks has quietly made some impact plays on the football for the Jets throughout training camp. With no Lamarcus Joyner recently, Parks has filled in and taken some starting reps alongside Jordan Whitehead. Parks is more proven than the youth the Jets’ depth consists of at safety in Jason Pinnock, Ashtyn Davis, Elijah Riley, and Tony Adams, which could help his chances.

Knight has been a popular player since being signed as an undrafted free agent earlier this year. He had 13 rushing yards and a touchdown in the first preseason game. Knight has made some splash plays in camp as well.

Streveler was signed by the Jets at the start of camp. In the first preseason game, he went 6-for-9 with 62 yards, two touchdowns, and no interceptions. He also had two rushes go for 31 yards. He helped lead the Jets’ game-winning drive. He may find a spot for himself to continue his development on the practice squad.

Wildgoose can play in the slot. He has made an impact in training camp. Wildgoose was active in the first preseason game with five tackles.

With the Jets’ injuries at offensive tackle to Mekhi Becton, Conor McDermott, and Chuma Edoga, along with limited reps for George Fant, Hermanns has had an opportunity to fill in. He is tough and competitive and may have an opportunity for the second straight year to stick around on the practice squad.