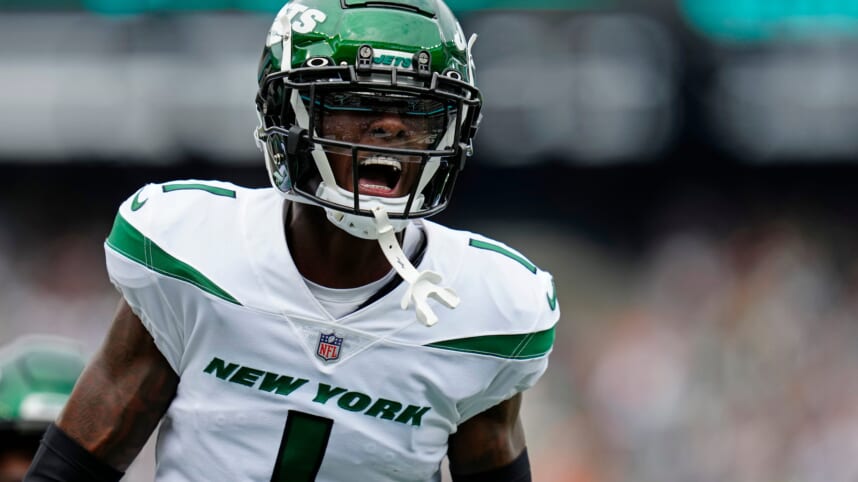 A win to get to 3-2 for the New York Jets tomorrow would certainly be promising. Competing against a high-flying 3-1 Miami Dolphins team that has made a statement so far in the young season presents the Jets with a good challenge.

Going over both the tape and the stats entering this one, the strengths and weaknesses of the Dolphins are fairly clear. Their explosiveness offensively is self-explanatory.

For the Jets, as usual, not beating themselves is a clear-cut top key. The turnover, third down, red zone, and penalty battles could make the difference in the end.

Let’s take a look at the five keys to victory for the Jets in Week 5.

As mentioned in the introduction, this is obviously a widely-known facet of the Dolphins that will dictate how the final score shakes out for the Jets.

Tyreek Hill and Jaylen Waddle are two of the fastest players in football. Not only can they win down the field vertically with their 4.3 speed, but with their ability after the catch as well.

This will be a game in which the Jets should predominately work with two deep safeties. The Dolphins rushing attack offensively is a major weakness the Jets should not have to overly commit to. In turn, deploying two safeties deep is a way to help slow down what Hill and Waddle can do.

From there, the Jets have three cornerbacks who have had great starts to the year themselves. DJ Reed has been one of the Jets’ best players through four games. First and second-year players Sauce Gardner and Michael Carter II have played well and have the speed to match Hill and Waddle.

The attacking style the Dolphins’ defense plays with will give the Jets’ offense a chance to have big plays in the air themselves.

Up front, the Dolphins can line up seven or eight players at the line. They typically work with one deep safety. A chunk of man coverage will probably be played as well, in particular Cover-0 and Cover-1.

As a result, chances for big plays from Elijah Moore, Garrett Wilson, and Corey Davis will likely be there, and the Jets will need to capitalize.

Whether it be down the field against Cover-1 in one-on-one situations or underneath operating east and west with a ton of space after the catch against off-coverage Cover-0 blitzes, Zach Wilson and the Jets’ top three wide receivers will have their opportunities to create big plays.

Also, statistically, the Dolphins’ passing defense is 31st in yards (1,197 total, 299.3 per game) with just one interception this year. No reason why the Jets’ passing game cannot put up points on big plays tomorrow.

Contain the strength of the Dolphins’ defense, their front:

The Jets will have Duane Brown for the first time tomorrow. Alijah Vera-Tucker will make another change back to the right side, likely at tackle. It will be on the Jets’ offensive line to contain the Dolphins’ front.

The top two players worth keying in on are Emmanuel Ogbah and Melvin Ingram. Ogbah offers some inside-out versatility. Ingram is still dynamic as a pass rusher.

On the inside, they have a multitude of players who rotate. Two worth attention are Christian Wilkins and Zach Sieler.

Jaelan Phillips has not had the desired start but is still a gifted player who could break out.

While their pass defense has struggled, the Dolphins’ run defense has been much more respectable, allowing 103.8 yards per game (11th in NFL).

Finally, in the passing game, the Jets have shown a willingness to chip with running backs and tight ends to help their offensive line. It may be a focal point again tomorrow in order to create the big plays, as noted in the key above.

Across the board defensively, the Jets’ defense finally put together a good four-quarter performance a week ago. Now, it is time to build on that and show some consistency.

The secondary slowing down Hill and Waddle was highlighted earlier. One way to take the stress off the secondary is winning up front with four.

Quinnen Williams should keep dominating, especially when given one-on-ones with Liam Eichenberg. Carl Lawson should keep building on his recent progress by winning a few with Terron Armstead. Lastly, against Greg Little, Jermaine Johnson and John Franklin-Myers have got to generate pressure.

The running game of the Dolphins is nothing to be concerned about. This should be another stout outing for the Jets’ run defense, that is ranked 13th in football.

Capitalize on any special teams opportunities:

Aside from the Cincinnati Bengals game, the special teams of the Jets has seen chances to make their impact felt. Last week, they missed an opportunity to pick up a muffed punt that would have made things easier.

The Week 2 comeback was headlined by the Jets’ special teams coming up big each time they needed to. Once again tomorrow, chances may present themselves in the third phase that the Jets have got to be ready to pounce on.