Do the Jets have a real shot at winning the AFC East this season? 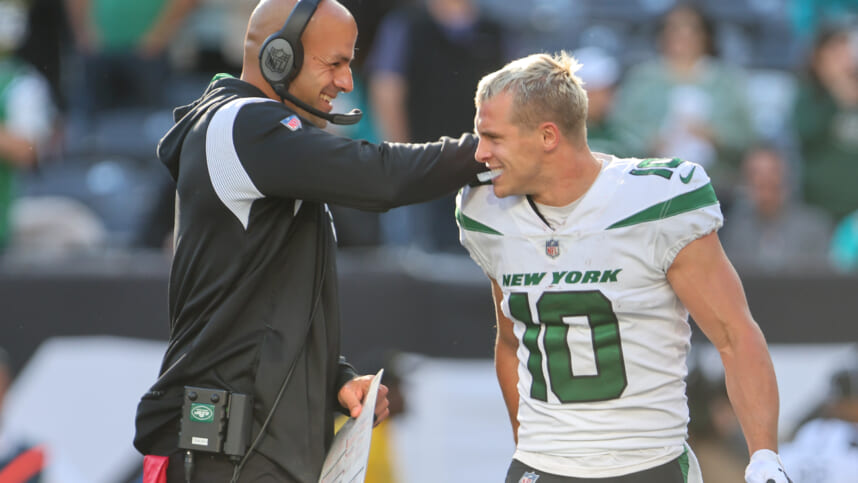 The 2022 New York Jets just enjoyed their bye week. They are coming off of a statement win, which improved their record to 6-3 just past the midway point of the year.

At the moment, the Jets find themselves as the fifth seed in a competitive AFC, thanks to being in the best division in the NFL. They did, however, get some help yesterday.

The Buffalo Bills lost to the Minnesota Vikings, which dropped them to 6-3. With the Jets having the head-to-head tiebreaker over the Bills after beating them, the Jets moved up to second place in the AFC East. With a win this week in Foxborough over the New England Patriots, the Jets would move into first place in the division.

The team currently at the top, the Miami Dolphins, sit at 7-3 on a four-game winning streak. They are on their bye this week. If the Jets can win, they would improve to 7-3. Once again, similar to the Bills, the Jets are 1-0 against the Dolphins this year. That gives them any tiebreakers between the two until they meet the last week of the season.

Also, aside from just the division, the Jets did get some help in terms of wild-card playoff positioning, with the Los Angeles Chargers losing to the San Francisco 49ers last night.

It starts with the elite-level defense the Jets have that will keep them in every game. The unit currently ranks seventh overall in football. They have talent and depth at all three levels of the defense, with a few premier difference-makers.

The Jets’ defense has proven itself to be balanced, whether it be defending the run or the pass. They have shown that both their pass rush and coverage can step up and take control of a game whenever. The defense is allowing, on average, under 20 points a game.

From there, the Jets’ special teams has proven to be a unit that can make impact plays in timely moments.

The keys will, in most games, come down to not beating themselves with turnovers and penalties. As shown in the first Patriots game, the turnover battle combined with one untimely penalty crushed their chances. They will be obvious indicators for the Jets in virtually every game.

Since Zach Wilson has returned, the Jets have a 5-1 record. In all five of those wins, they have won the turnover battle, and as just mentioned, in the lone loss Wilson has had to the Patriots, the Jets fell short in the turnover department.

Another reason to feel good about this football team’s chances are the reinforcements coming offensively. Whether it be Elijah Moore moving to the slot, a healthy Corey Davis, George Fant, and Max Mitchell with likely imminent returns, or James Robinson getting himself more and more acclimated, the Jets’ offense should only improve.

From there, looking within the division, a win over the Patriots this week puts the Jets a full two games over them with only seven weeks left of play. As of late, the Bills have really struggled over their last 10 quarters of play. Not to mention, Josh Allen and their defense are a bit banged up. However, the Bills will still remain competitive, well within the thick of things. Lastly, the Dolphins have four remaining road games against the 49ers, Chargers, Bills, and Patriots.

It will certainly not be easy, but the path is undoubtedly there for the Jets to take this division. They have already surpassed nearly all expectations winning six games just halfway through the season. If the Jets continue to play their style of ball, they can absolutely take this division when it is all said and done.