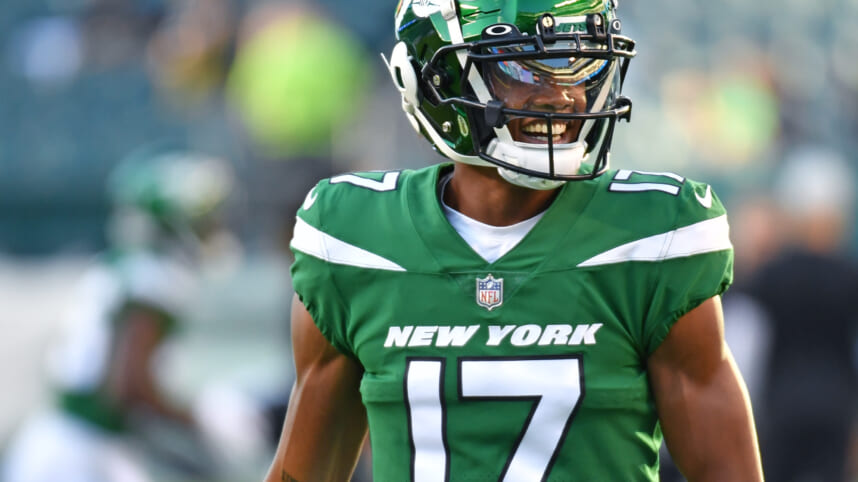 While essentially no starting veterans played in last night’s preseason game, there were still a dozen noteworthy performances New York Jets players had. The headliners from the second preseason game were two rookie draft picks. From there, most of the players worth discussing are competing for roster spots. Let’s take a look at 12 Jets who did well Monday night.

12 New York Jets players who stood out against the Falcons:

One of the few players to participate who will be counted on significantly for the Jets in Week 1, Garrett Wilson continued to display great things last night. Starting from the first offensive play of the game, Wilson was involved.

Wilson had three catches for 15 yards. His first two catches were impressive, working near the sideline. He showed his rare ability to haul in impressive grabs on his second catch. Wilson continued to prove himself and generate more excitement about his potential last night.

With injuries and veterans getting rest, the Jets virtually had four edge defenders throughout this game. It led to rookie fourth-round pick Micheal Clemons gaining a good chunk of playing time. Clemons continued to show more promise last night. He was consistently active. Clemons was playing hard in pursuit against the run, finishing plays. He concluded the game with three total tackles. His size jumps out, and Clemons has upside as a young pass rusher.

The Jets fourth quarterback had yet another inspiring outing. Chris Streveler gave the Jets great energy with his playmaking ability. He helped lead the team to a second straight comeback victory.

In last night’s matchup, Streveler went 8-for-11, throwing for 119 yards, with a touchdown and a 100.2 rating. On the ground, he showed his ability to run for the second game in a row. Streveler ran for 33 yards with one big run that went for 14. Streveler has been a joy for Jets fans to watch so far, and he only improved his roster chances in this game.

The former wide receiver kept up his encouraging play in the second preseason game. Lawrence Cager caught three passes for 65 yards (21.7 per catch) which was highlighted by a 34-yard score. He continues to show his speed and athleticism in space after the catch. Cager has led the Jets in receiving in each of the first two games of this preseason.

The abundance of depth on the Jets’ defensive line showed up again. This time, it was Bradlee Anae. He had two total tackles. Rushing the passer, Anae recorded two quarterback hits, a sack that caused a fumble that he recovered and ran for a touchdown. Anae was active for the Jets in this game. With only four defensive ends up for this one, Anae certainly proved himself well with the opportunity he had.

Another defensive lineman vying to be a part of this final squad. Second-year defensive tackle Jonathan Marshall showcased the immense athletic upside he possesses. In last night’s outing, Marshall had five total tackles. He was active in the backfield with two tackles for loss, one sack, and one quarterback hit. Marshall needed a good performance and ultimately put a game in which he was active together.

Following Marshall, another day three draft pick in 2021 had arguably his best showing to date. Second-year linebacker Jamien Sherwood displayed some encouraging things against the Atlanta Falcons. Sherwood recorded four total tackles and had one pass defended. He was active in the box against the run. With some unknowns and possible competition at linebacker for the Jets, it was great to see a recent fifth-round selection in Sherwood show some progress.

Alongside Jordan Whitehead, there are concerns on who will contribute for the Jets at safety. Will Parks has had a solid summer and stood out well in comparison to his competition last night. The seventh-year veteran had two tackles. His splash play of the night was an impressive one. Despite losing his footing, he read a play-action screen well, took a good angle, and finished with a physical tackle at the line of scrimmage. Parks may just be the starter with Whitehead.

While the Jets rushing attack as a whole had a quiet night, rookie undrafted free agent Zonovan Knight showed what special teams value he could offer the Jets. With the Jets’ top three running backs essentially set with Breece Hall, Michael Carter, and Tevin Coleman, proving worth on special teams will be key to entice the team to keep a fourth running back. The 21-year-old first-year player showed his shiftiness on a return that started the Jets’ two-minute drive that led to a field goal. Knight’s impressive return went for 38 yards.

One of the Jets’ most polarizing players put together a needed, good performance. Third-year wide receiver Denzel Mims had three catches for 43 yards (14.3 per catch). His best play went for 27 yards on a deep in route that helped set up the Jets’ field goal before the half. Mims showed comfortability catching the football and kept mistakes to a minimum, helping his chances.

Last week in practice, Tarik Black was consistently gaining some reps with the Jets’ second team. He helped himself with last night’s showing. Black caught all four of his targets for 47 yards (11.8 per catch) with a long of 18 yards. He did, unfortunately, have to exit the game as a result of a bad hit he took. Nonetheless, Black did a solid job, making the most of his chances to ultimately boost his value as the potential sixth wide receiver for the Jets.

The rookie undrafted free agent Tony Adams made a few inspiring plays from his safety position last night. Particularly against the run, Adams held his own in space and finished plays. He totaled four tackles in last night’s outing, two of those being solo finishes. Adams offers some size, explosiveness, athleticism and displayed physicality in his game last night.