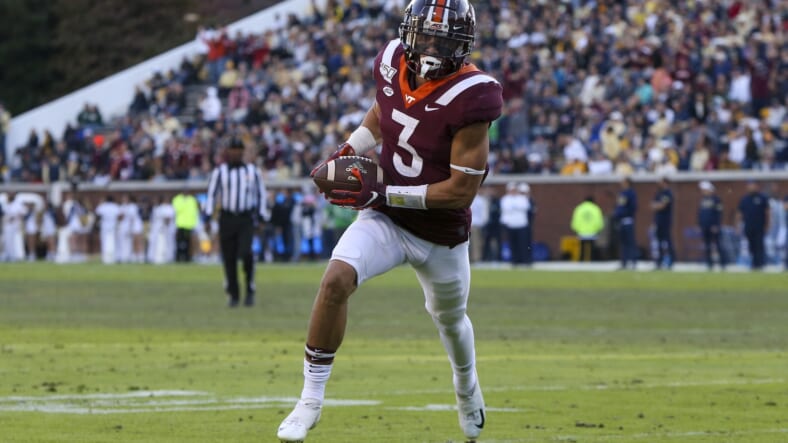 The New York Giants are in need of help on offense. Many fans and analysts project that the Giants will take a wide receiver with the eleventh overall pick in the 2021 NFL Draft to solve their offensive problems. But there are certain scenarios where the Giants could go defense at eleven overall.

If the Giants do go defense at eleven overall, there are a few prospects that could entice them. But one intriguing player could be a surprising, but exciting selection with the eleventh pick. Caleb Farley, an uber-athletic cornerback out of Virginia Tech, is an electric prospect that has risen up draft boards in recent weeks.

Caleb Farley is an elite athlete and impressive prospect

Caleb Farley is such a unique cornerback prospect. He stands tall at six feet two inches and has a well-built frame of 197 pounds. Farley started his football career as a quarterback in high school and began his collegiate career at wide receiver before transitioning to the defensive side of the ball in 2018.

That position switch paid great dividends for Caleb and his career. Farley broke onto the scene as a cornerback with elite physical traits in 2019. Not only is he tall and strong, but Farley is also extremely athletic. He once said in an interview that he ran a 4.25s forty-yard-dash in high school, but no one believed him so he told everyone he ran a 4.35s forty.

Regardless of what he ran in high school, Caleb Farley is still blazing fast. He is projected to run a forty-yard-dash time around 4.35s. Caleb was also “reportedly clocked at over 24 miles per hour on GPS trackers during the Notre Dame game last season,” per Pro Football Focus.

Caleb Farley put his elite athleticism into effect with advanced technique as a cornerback in college. He has clean footwork and the ability to mirror wide receivers’ routes. Farley was also very productive, recording six interceptions over the last two seasons. Combining his technique with his incredible makeup speed makes it increasingly difficult for wide receivers to beat him over top.

The Giants run a very versatile defense. Patrick Graham calls a lot of disguised zone coverage blitzes but also relies on sticky press-man coverage in key situations. Caleb Farley would fit right into this defense with his experience playing plenty of zone coverage with West Virginia and his elite man-coverage traits that were always on full display in college.

Caleb Farley is a flawed cornerback with a high ceiling

Caleb Farley is by no means a perfect prospect. In fact, there are some glaring weaknesses that could scare teams away from drafting him in the top ten-to-fifteen. Caleb suffered a non-contact ACL tear in 2017 and also missed the final two games of the 2019 season due to back spasms, showing somewhat of an injury history.

Additionally, Farley is being projected as a press-man coverage cornerback in the NFL because of his traits. However, according to Pro Football Focus, Caleb Farley had only 58 press-man coverage snaps in his collegiate career. He is inexperienced in playing the defensive role that he is expected to flourish in at the next level.

Regardless of his injury history and inexperience, Farley is still one of the most intriguing defensive prospects in the 2021 NFL Draft. Caleb is a superb athlete that has all of the traits to be an elite cornerback in the NFL. He projects nicely as a press-man cornerback but will need to refine his skills to achieve success in the pros.

If the New York Giants draft Caleb Farley, he will benefit from playing alongside James Bradberry within Patrick Graham’s complex defensive scheme. Farley would be covering secondary receivers on this roster. Patrick Graham would also be able to put Farley in a position to succeed with disguised coverages that allowed young cornerbacks like Darnay Holmes and Isaac Yiadom to make plays in 2020. Fans might hope to see the Giants draft a wide receiver at eleven overall, but the selection of Caleb Farley would be one to excite fans long-term and fill a major need on defense with an elite athletic prospect.