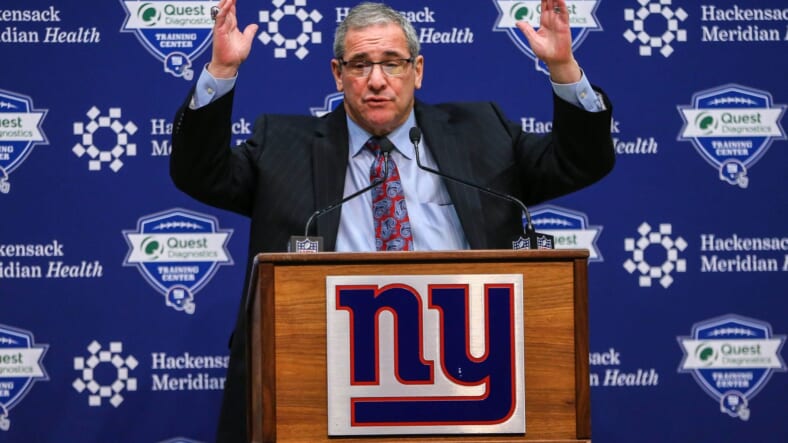 The New York Giants are once again picking in the top-ten of the draft. This year, the Giants hold the fourth overall pick. Last year, New York secured its franchise quarterback, Daniel Jones, with the sixth overall pick in the 2019 NFL Draft. While almost every fan is happy with this selection in retrospect, many of them wanted to see the Giants trade down in last year’s draft.

This year, trading down is a legitimate possibility. Dave Gettleman has never traded down in the first round of the draft as a general manager before. However, according to Jordan Raanan of ESPN, the Giants are “open to” trading down in 2020.

With multiple teams looking for new quarterbacks this offseason, the Giants could get a haul of picks for the fourth overall selection that they own. But what exactly could they get for this pick? Will they get offered enough to move down?

What The Fourth Overall Pick Is Worth:

Many Giants fans are not likely to be happy with a trade that lands the Giants outside of the top ten. But, luckily for the Giants, there are multiple quarterback-needy teams that are picking inside of the top-ten and will be looking to trade up to get their guy.

If going strictly by the NFL Draft Trade Value Chart, the Giants can get a top-ten pick and a second-round pick for the fourth overall selection. However, knowing what we know about the quarterback market, the Giants could get a lot more than that.

While most teams are likely to only give up assets similar to the value from the trade chart, a bidding war could inflate the price of the Giants’ pick. The Dolphins and Chargers are teams that are definitely in the market for a quarterback. However, the Panthers, Colts, Raiders, and Buccaneers are examples of other teams that could possibly get their names in trade discussions for a new signal-caller.

Recent NFL Draft trades for quarterbacks suggest that the Giants would be able to get a king’s ransom for the fourth overall pick if a team is moving up to select a quarterback:

Regardless of how far back the Giants move, they will be able to get a humungous haul of draft picks in exchange for fourth overall. If they are presented with the opportunity to trade back, they should take it (unless Chase Young is available). The Giants will easily be able to get an additional second-round pick for their selection and can likely get an additional first-round pick from the right team. If there was ever a year where the Giants should trade down, this is that year.