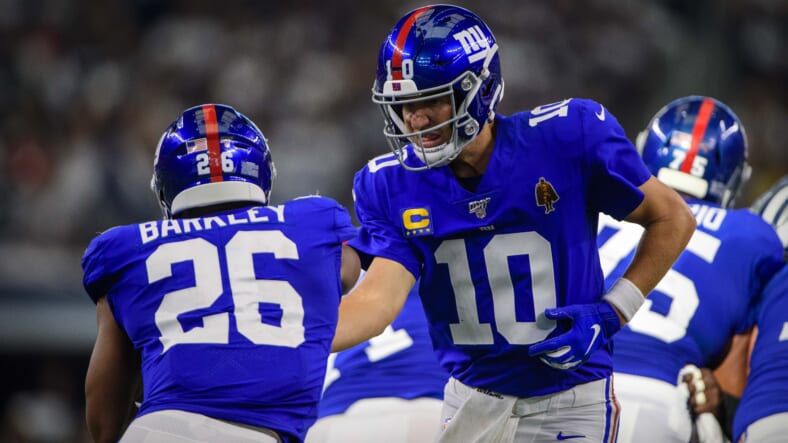 The New York Giants just got embarrassed in a week one blowout loss against the division-rival Dallas Cowboys. The Giants defense has stolen all the headlines for the putrid performance in pass-defense. The Giants let Dallas quarterback Dak Prescott have a career-day and post a perfect 153.8 quarterback rating.

Yes, the Giants’ defense was awful and was the main reason they lost on Sunday. But it was not the only reason. The Giants’ offense should shoulder plenty of blame as well.

The Giants’ Game Plan In Week One

The Giants had so much hype surrounding Saquon Barkley heading into the season. Barkley is coming off of an incredible Offensive Rookie of the Year season in which he lead the league in scrimmage yards with 2,028. Despite this, Barkley was barely a part of the offense in week one.

The Giants gave Saquon Barkley a measlyÂ 11 carries despite Barkley averaging 10.91 yards per carry. Saquon got the ball rolling on the Giants’ first drive and looked like his usual explosive self, busting through with a 59-yard run on the Giants’ second play from scrimmage.

59-yard gain on the second play for the @Giants! #NYGvsDAL

Unfortunately, Barkley did not see too many more opportunities like this for the rest of the game. The Cowboys have a star running back of their own in Zeke Elliott. Eliott had not practiced all offseason and signed a contract just two days before the first game of the season. Despite this, Dallas had the wisdom to feed their star running back.

Elliott got 13 carries, two more than Barkley, despite not playing football in pads in over a year. Instead of running their offense through their best player, the Giants decided to run a pass-heavy offense against the Cowboys’ strong pass-rush.

What The Giants’ Game Plan Needs To Be In Week Two

Pat Shurmur had multiple opportunities to get Saquon Barkley the ball on third or fourth and short but found every way possible not to. The Giants were awful on third down against the Cowboys, converting only two of their twelve opportunities.

Pat Shurmur noted that this was an area that the Giants needed to improve on in week two. The way to improve the third-down rate is to give the ball to Saquon Barkley. Barkley was targeted six times as a receiver, catching four of those passes, making his touch total 15.

Saquon Barkley is a generational talent who needs more than 15 touches and needs at least 20. If Barkley does not receive 20 touches in week two against the Bills, the Giants’ offense will disappoint again.

Another key to beating the Bills will be keeping the defense off the field as much as possible. Again, the solution is simple: feed Saquon Barkley. The more time the Giants take up running the ball, the more time their defense sits on the sideline.

Saquon Barkley is the best player on the New York Giants. It is time for Pat Shurmur to game plan as if he realizes this. Shurmur cannot use Saquon as a decoy anymore. He needs to be used as a force on offense. If this necessary change is made in week two, the Giants have a good chance of beating the Buffalo Bills in the 2019 home opener.