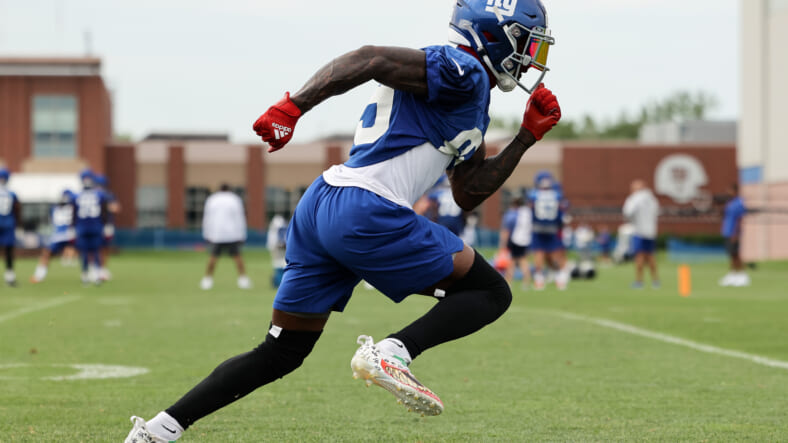 The New York Giants made a shocking trade today, shipping away 2021 first-round pick Kadarius Toney. New York parted ways with the shifty wide receiver after just one and a half seasons with the team. The Giants were not getting much out of Toney as he appeared in only two games this year, totaling 0 receiving yards on two receptions. This move frees up $1.2 million in cap space for the Giants as they add to their total 2023 draft capital.

The New York Giants traded wide receiver Kadarius Toney to the Kansas City Chiefs today in exchange for a 2023 third-round pick and a 2023 sixth-round pick, bringing their total amount of picks in the upcoming draft up to nine. According to Dan Duggan of The Athletic, NFL execs predicted Kadarius Toney’s trade value to be a fifth-round pick, which the Giants achieved and-then-some. The Giants are now sitting with a slew of draft picks in the upcoming 2023 draft:

The New York Giants have a lot of draft capital to work with in the upcoming 2023 NFL Draft. That is, of course, if they do not use any of it to make trades before the upcoming deadline. The Giants could be in the market for a wide receiver to replace Kadarius Toney.

One name to keep any eye on is Denver Broncos wide receiver Jerry Jeudy. The 2020 first-round pick could be on the trading block. Jeudy is believed to be coveted by the Giants, as well as many other teams. No doubt, Jerry Jeudy would provide the Giants with an instant upgrade in the receiving department. But he would not come cheap. The Giants would need to be willing to part with a significant amount of their 2023 draft capital in order to acquire Jeudy or another starting receiver’s talents. Thankfully, the Giants have some added draft capital to work with.