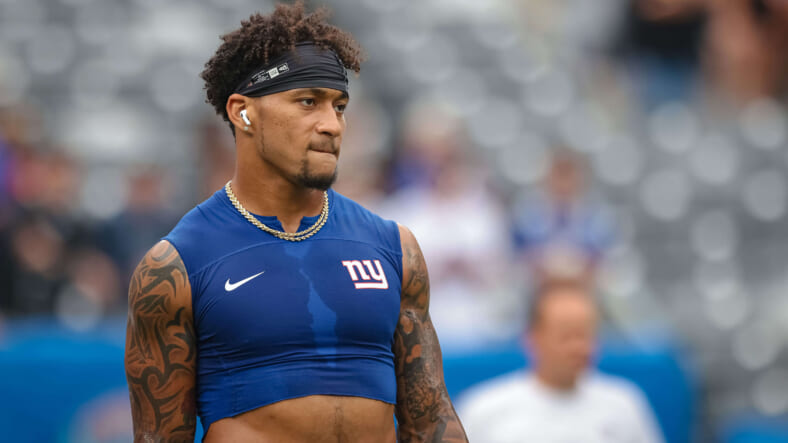 New York Giants tight end Evan Engram is arguably one of the team’s most polarizing players on offense. Making his season debut against the Atlanta Falcons in Week 3, Engram posted just two receptions for 21 yards. His impact was minimal, as the Giants primarily relied on Kenny Golladay, reserve receiver Collin Johnson, and running back Saquon Barkley to carry the load.

With the team starting 0-3 on the season, the Giants have a few big decisions to make this year as they ponder the future. After spending an exorbitant amount of money this past off-season to maximize quarterback Daniel Jones’s rookie window, they will have to find ways to open up salary space.

One way the Giants can add draft capital and a bit more salary flexibility is by trading Engram, who is currently in the last year of his rookie contract. The Giants picked up his fifth-year option, which will pay him $6 million this season.

Having suffered a calf injury against the New England Patriots in the final preseason game, Engram was unable to play against Denver and Washington. However, the athletic tight end has become more of a liability than an asset.

Despite Engram’s blazing speed and fantastic physical attributes, he has dropped 25 passes over the past four seasons, including eight last year, with six of Jones’s 12 interceptions going his way. However, the 27-year-old was unable to make a positive impact against the Falcons on Sunday afternoon.

In fact, his biggest contribution was a fumble in the third quarter with the Giants trailing by one. If not for an Azeez Ojulari strip-sack on Matt Ryan on the Giants’ 35-yard line, Engramâ€™s turnover wouldâ€™ve been far more costly.

At this point in his career, the Giants simply need to maximize his value and collect draft capital. When fans are cheering as a player walks off the field, you know things are a bit overdone, as the former first-round selection has been unable to alleviate his turnover issues and drops. The bigger question is, what could the Giants get in return for his services?