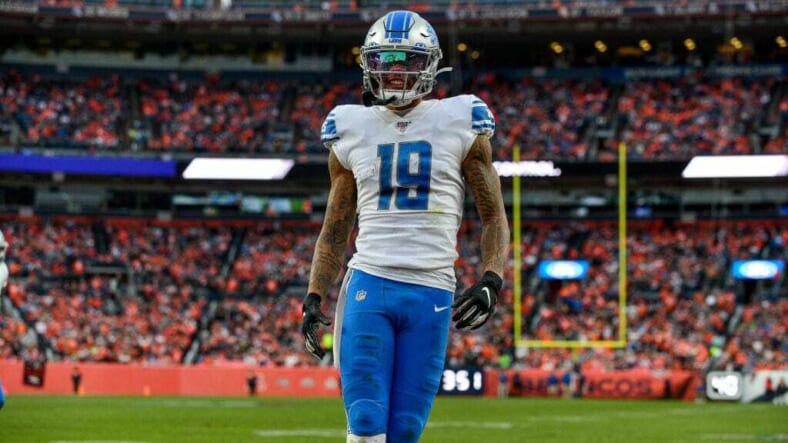 It is no secret that the New York Giants desperately need to allocate resources toward an offensive playmaker. While the 2021 NFL draft offers an extremely deep receiver class, free agency also has its benefits.

The Giants have been linked to Detroit Lions WR1 Kenny Golladay for quite some time, inquiring about him prior to the trade deadline in 2020. It is no surprise that they are once again keeping tabs on him as free agency starts on March 17. However, legal tampering for players begins on Monday, so the Giants could already be in contact with him at the start of the week, gauging his price tag and health coming off an injury-riddled 2020 season.

On ESPN’s Breaking Big Blue podcast, beat reporter Jordan Raanan states that the Giants are very clearly interested in Kenny Golladay and will likely place a bid on him in free agency.

â€œThereâ€™s some concerns about Kenny Golladay, but this is a player the Giants are interested in,â€ Raanan said. â€œThis isnâ€™t just me making a grand assumption; this isnâ€™t just me connecting the dots. I am telling you, the Giants are interested in Kenny Golladay. Thereâ€™s a reason they called the LionsÂ last year around the trade deadline. A deal wasnâ€™t going to happen, but itâ€™s a player thatâ€™s interesting to them â€” that they like.

â€œNow, there are some concerns. Heâ€™s been injured, heâ€™s played one 16-game season in his four years and thereâ€™s a reason the Lions didnâ€™t really want to sign him long-term. They obviously did not feel totally comfortable giving him that money.â€

Golladay played in just five games last season, totaling 338 yards and two scores. His best season came in 2019 when he earned a Pro Bowl nod for his performance. Playing an entire 16 game season, Golladay posted 1190 yards and 11 touchdowns, establishing himself as one of the best receivers in the NFL when healthy.

This correlates extremely well to Allen Robinsonâ€™s time in Jacksonville, having posted just one season with over 1000 yards and double-digit scores, but spent the 2017 season injured and then signed a big contract with the Chicago Bears anyway.

Golladay has two seasons with over 1000 yards under his belt, so you could make the argument he was better than Robinson when he left Jacksonville.

At 27 years old, Kenny likely has another three years left of elite play left in him, maybe more. The Giants have tried to stick with three-year contracts as of late, and I think that would be a perfect amount of time for the big-body receiver unless an alternative team is willing to offer more years and more money.

Nonetheless, he would be a perfect scheme thing with the Giants, offering them a big body to utilize against man-coverage and in the red-zone. When at the top of his game, Golladay is an unstoppable receiver with an extraordinary wingspan. He would offer Daniel Jones a great security blanket and a bonafide WR1.