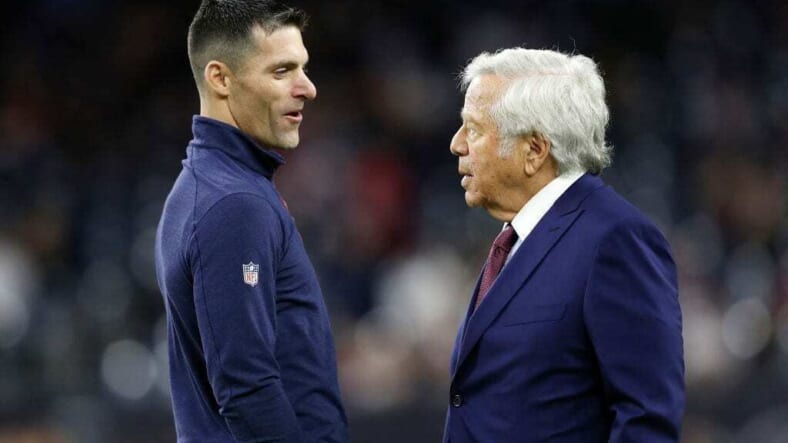 HOUSTON, TX – DECEMBER 01: Director of player personnel Nick Caserio of the New England Patriots talks with owner Robert Craft before the game against the Houston Texans at NRG Stadium on December 1, 2019 in Houston, Texas. (Photo by Tim Warner/Getty Images)

Some believe that the New England Patriotsâ€™ coaching tree is untrustworthy when hired around the NFL. Others think that the genius of Bill Belichick rubs off on Patriots coaches, making them sought after targets, including teams like the New York Giants, who hired Joe Judge to be their head coach.

While Judge and the New York Giants are 1-6 on the season, he has done a stellar job keeping them focused and competing during hard-fought games. His team isnâ€™t too far behind from edging out these victories, but there are still a few players away from being considered a respectable team in the NFL.

Of course, one of the bigger factors in the degradation of the team has been general manager Dave Gettleman, who has found ways to give away draft picks at every corner. Whether it be sending a third and fifth-rounder to the Jets for Leonard Williams during a lost season or spending a third-round pick on Sam Beal during the supplemental draft in 2018, his moves havenâ€™t paid off in wins.

The Giants’ belief in Judge means they will stick with him for at least another two seasons, especially after showing a brand new culture and discipline within the organization. However, some believe that the Giants could fire Gettleman and target another Patriots staffer.

CBS’s Jason La Canfora believes the Giants could be intrigued by Nick Caserio of the Patriots:

The team has long had interest in Caserio, who has withdrawn from opportunities to take general manager positions in the past and been prevented from pursuing others. New England is nearing a potential full-scale rebuild, while the Giants continue to lose games and struggle to contend even in the lowly NFC East. There were some within the organization who believed the Mara family should have made a general manager switch a year ago, when Joe Judge was hired to replace fired coach Pat Shurmur, and that pressure is mounting again, sources said, with the Giants plodding through what is shaping up as another lost season.

As La Canfora states, the Giants have had a long-term interest in Caserio, who is currently an executive and the director of player personnel for the Patriots.

There is an argument against Caserio, as the Patriots have only had four players play in the Pro Bowl since 2013. This more attests to the coaching staff and how they demand perfection in every facet of their scheme. Of course, it requires great personnel to fit the mold of their game plan and system.

Judge is following a similar mold, focusing on the details of his teamâ€™s system and fitting players to that mold. Having a general manager who is on the same page is essential for success, so the Giantsâ€™ interest in Caserio does not surprise me.