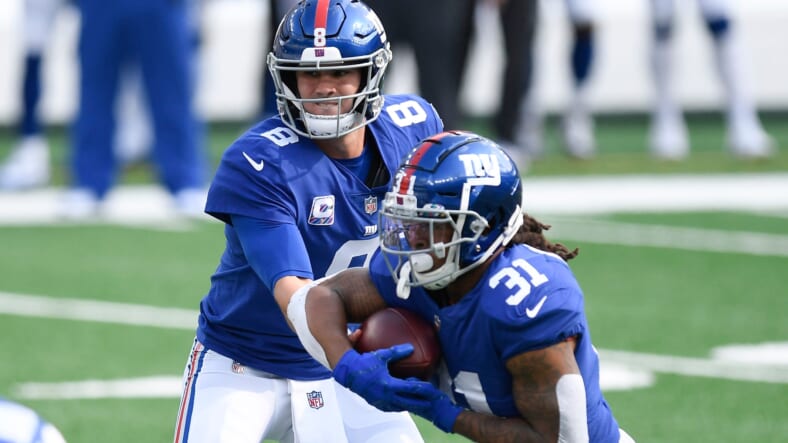 New York Giants quarterback Daniel Jones (8) hands the ball off to New York Giants running back Devonta Freeman (31) in the first half against the Washington Football Team at MetLife Stadium on Sunday, Oct. 18, 2020, in East Rutherford. Nyg Vs Was

The New York Giants are going to need everybody to compete against Tampa Bay Buccaneers on Monday night in what is sure to be a blowout.

Tampa has positional advantages across-the-board, and the Giants are currently dealing with several injuries that could affect their game plan significantly.

As of Saturday, running back Devonta Freeman, who suffered an ankle injury early on against Philadelphia Eagles, has been ruled OUT. Considering the challenge ahead, resting him one more week should be the priority.

RB Devonta Freeman (ankle) and WR Sterling Shepard (turf toe/shoulder) both "have a chance" to be ready for Monday night vs. Bucs, per Joe Judge. Shepard is almost expected even though he's been limited. Freeman hasn't practiced this week. #Giants

Wide receiver Sterling Shepard suffered a turf toe injury against the Chicago Bears in week two, and he missed the next four games due to the injury. He returned last week against Philly, hauling in six receptions on eight targets for 59 yards and a touchdown. He was an influential factor and boosted the offense’s ability to move down the field exponentially. Having him in the lineup is important for Big Blue, and it is believed that despite his limitations during practice this week, Shepard will be a full go against Tampa.

How does Sterling Shepard help the New York Giants’ offense?

As one of the best route runners in the NFL and undoubtedly on the Giants, Sterling opens up the field in many different ways. He is elite in a red zone and getting into open space, as well as activating web routes during offense of drives. He currently has 135 yards this season over three games, but the Buccaneers have a stellar defense with fantastic coverage corners.

Against the Green Bay Packers in week six, the Buccaneers held star receiver Devante Adams to just six catches and 61 yards, forcing one of the worst statistical performances from Aaron Rodgers in recent years. He threw for 160 yards and two interceptions, failing to find the end zone.

Even if Shepard is able to play, it doesnâ€™t seem as if it will make much of a difference, as the Giants are severely outmatched.

On the defensive side of the ball, slot corner Darnay Holmes is also expected to play with a long week’s rest. Having injured his neck in week five against Dallas, he missed the victory over Washington lost and the loss to Philadelphia. Having him back to mark up Scotty Miller in the slot would be a nice boost.