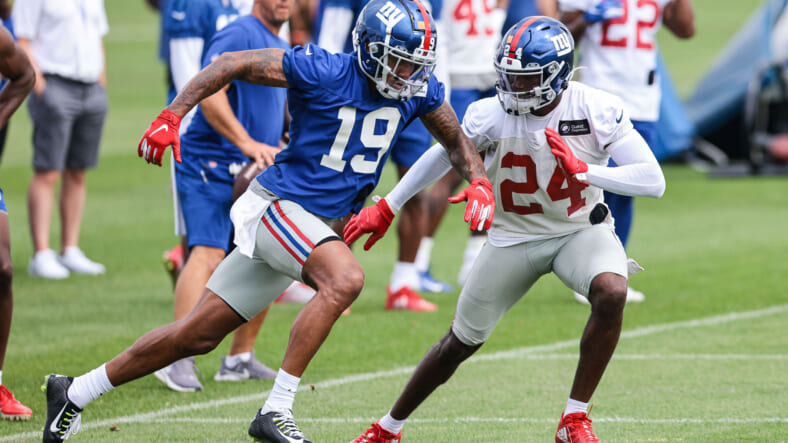 The New York Giants had their first padded practice of the 2021 season today. Training camp has intensified now that the pads are on, leading to some big hits and some big brawls. The Giants grabbed headlines today because of a team-wide fight sparked by a big hit handed out to running back Corey Clement. This was not the only big-hit from training camp, as wide receiver Kenny Golladay took a shot from linebacker TJ Brunson a few days ago.

Kenny Golladay walked away from that big hit unscathed. But today, the Giants’ big-time receiving threat left practice early with an apparent hamstring injury. After catching an underneath reception in team drills, Kenny Golladay had the ball punched out of his hands by linebacker Tae Crowder. After fumbling the football, Golladay almost immediately reached for his hamstring and walked off the field with a trainer.

WR Kenny Golladay just walked inside with a trainer not long after this play. You can see him kind of grab the back of his leg. #giants pic.twitter.com/xCAjGffmmX

There are no details yet on the severity of Kenny Golladay’s injury. However, this is a situation that Giants fans will want to closely monitor. Golladay has had some injury troubles in the past. Last year, his season with the Detroit Lions was cut short after five games as KennyG suffered a serious hip injury. Kenny was shut down in Week Eight due to a hip injury after playing Week Three through Week Seven. Golladay missed Weeks One and Two with a hamstring injury that he suffered in an early September practice.

He returned to the lineup in Week Three and caught a touchdown pass, though he was not playing at 100% health. The hamstring injury Golladay suffered last year was a three-four week injury, considering he was not fully healthy when he got back on the field. But he was only sidelined for two weeks. The Giants are hoping this new injury is less severe as they need their new alpha dog wide receiver to practice with the team and gel with Daniel Jones before the season begins.

This is where depth signings, like the ones the Giants made over the weekend, exhibit great importance. The Giants do not have many big-bodied, 6′ 3″ or taller wide receivers on their roster. Kenny Golladay fits that bill and plays a particular role in the Giants’ offense as their X-receiver. But what do the Giants do if Golladay is injured or cannot play?

Well, now they can continue to practice and install their offense with Damion Willis, a 6′ 3″ wide receiver that the Giants signed over the weekend. Willis is not the elite receiving threat that Golladay is, but the two players share a similar playing style which is important for quarterback Daniel Jones as he continues to get comfortable in the Giants’ remade offense. An official update will come soon enough on Kenny Golladay as New York Giants fans hold their breathe and cross their fingers in the meantime.