New York Giants: Why Placing The Franchise Tag On Landon Collins Might Not Be A Bad Idea 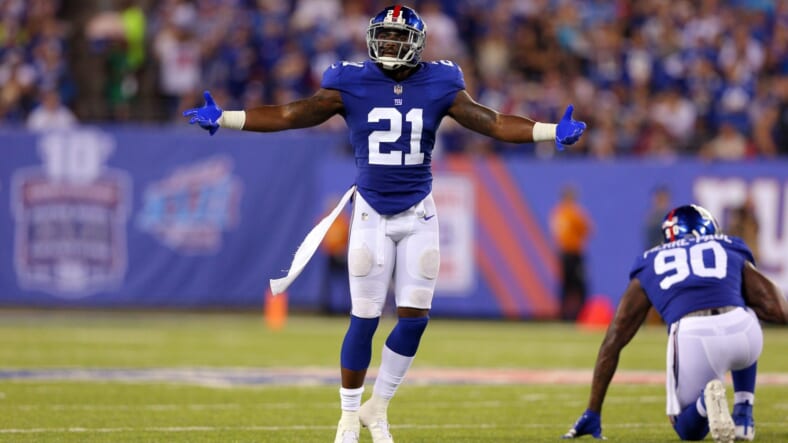 Beginning on February 19, NFL teams will be allowed to place franchise tags on pending free agents. According to reports, the New York Giants will be one of the teams to use their franchise tag in this 2019 offseason.

In 2016, Landon Collins was arguably the best safety in the NFL. He was a strong candidate for NFL AP Defensive Player of the Year. Collins posted a career high 5 interceptions and 13 passes defended that season while also being a force in run defense. He totaled an incredible 125 tackles with 9 tackles for loss. Landon even had 4 sacks in 2016. He was an unstoppable force on defense for the Giants in 2016.

Since then, things have been shaky for Landon. It could be argued that the reason for this is the Giants’ lack of talent at free safety. However, it cannot be denied that Landon has not been the same as his 2016-self in the past two seasons.

In 2017, the Giants were terrible. They went 3-13 and fired the entire coaching staff. Landon Collins was not awful that season, but he definitely took a step back from his dominance in 2016. Collins only had 2 interceptions in 2017. In addition, his tackle total dropped to 99 with only 3 tackles for loss. Collins did not record a sack in 2017, either.

However, Collins still flashed his raw talent in 2017. It is difficult to succeed at safety when Eli Apple is letting people run by him in coverage and you are not getting much help from a mediocre Darian Thompson. Collins was not as good in coverage, but he was still scary for runners to see in the open field.

With the addition of new defensive coordinator James Bettcher in 2018, the Giants were hopeful Collins would return to his 2016 production. Unfortunately, what the Giants got was a bit closer to the 2017 version of Landon Collins. In 12 games in 2018, Landon did not have an interception. He did have 4 passes defended though, and was still great in run defense. He had 96 tackles and 5 tackles for loss.

Unfortunately, the most concerning aspect of his 2018 season was his second time being placed on injured reserve.

One common theme for Collins in 2017 and 2018 is an unfortunate ending to his season. In both seasons, Landon suffered an injury toward the end of the year, ending his season with surgery. Week 16 of the 2017 season, Collins suffered a broken forearm. In 2018, it was a tear in his shoulder.

Injuries could be a cause for concern for Dave Gettleman and the Giants. The Giants will not want to invest a lot of money into a player if they do not think he will be able to stay on the field. When Landon was fully healthy in 2016, he was an all-pro.

The Giants will be looking to see if Landon Collins can remain healthy in 2019 under the franchise tag. If he can do that, and keep a high-level of play, he could earn himself an extension.

Seeing Collins Perform With Talent Around Him

Before committing to Landon Collins long-term, the Giants might want to see him play out one more season. Seeing him play with more talent around him might convince the Giants he is worthy of a new contract.

Collins has not really had a fair shot with safeties like Curtis Riley lining up opposite of him. The Giants could pair Landon with a competent free safety in the 2019 offseason. Doing this might elevate Landon’s play and possibly help him surpass his 2016 season.