New York Giants: Why Matt Peart Might Have Been a Day Two Steal 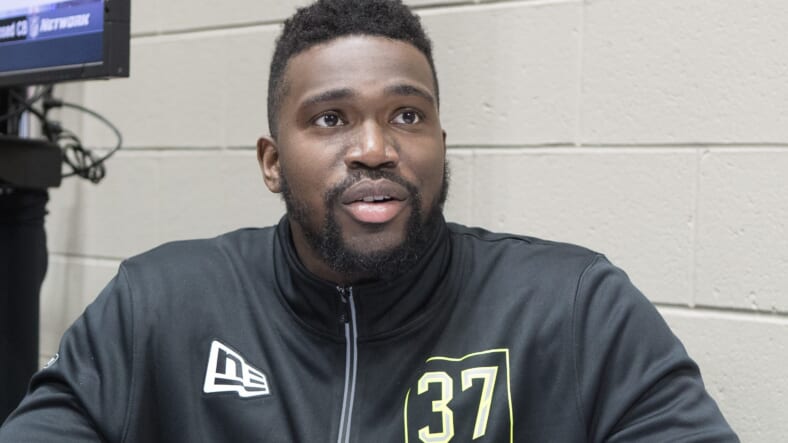 Like all NFL teams, the New York Giants spend endless hours trying to find middle and late-round gems each draft. Last year, it was wide receiver Darius Slayton; who led the team in both receiving yards and touchdown receptions as a rookie. In 2018, it was defensive tackle BJ Hill; who set the Giants rookie record for sacks with 5.5. According to many, and with good reason, the Giants might’ve found this year’s gem in offensive tackle Matt Peart. Peart, a four-year starter at the University of Connecticut, brings impressive size and athleticism, an outstanding work ethic, and a high ceiling with plenty of room for growth and development.

Why Matt Peart Might Have Been a Day Two Steal:

His size and athleticism

Size is key for being a starting offensive tackle in today’s NFL, but luckily for Peart, he checks off that box with ease. At the NFL Combine this past February, he measured in at 6’7″ and 318 pounds, making him one of the biggest tackle prospects in the entire draft. His long 36 5/8″ arms will also help him make the transition to the next level a lot easier.

For most, greater size means less athleticism. But that’s not the case for the UConn team-captain. Peart’s 5.06 40-yard-dash time was the eighth-best of all offensive linemen. And of those seven that posted better times, each of them was shorter than Peart, and only two of them weighed more. No wonder Big Blue was intrigued by him.

If there is anything Giants head coach Joe Judge cares more about than talent, it’s work ethic. Coming from the New England Patriots, Judge has seen players with less talent earn starting spots because of a skill only some players possess: the desire to get better. Peart is one of those players.

Since his time at the Governor’s Academy in Byfield, Massachusetts, Peart has prided himself on his work ethic. I spoke with Connecticut redshirt-freshman Winston Jules, a defensive back on the team, about what Peart brings to the team. Jules said, “You got a hard worker for sure.”

On a UConn team that has struggled mightily for years now, it could’ve been easy for Peart to give up on the team and transfer schools. But instead, he chose to work as hard as he could and give it his all for the Huskies. His high-motor says something about not only who he is as an athlete, but as a person as well.

It is rare a team finds a day-one starter in the late third-round. Most picks are used on players with great potential but aren’t quite ready to make the leap to the NFL. Luckily for Peart, the Giants have no intention of having him start in 2020. The plan is to have veteran Nate Solder start at left tackle, and first-round pick Andrew Thomas on the right. But with Solder’s struggles since joining the team in 2018, and Thomas already having experience on the left, the right tackle spot will be up for grabs in 2021.

That would be a perfect scenario for not only Peart, but the Giants as well. One of the biggest knocks on Peart is his strength, and if given a full season to bulk up, that knock could disappear. Come 2021, Big Blue could have a strong, athletic, long, young tackle helping to keep Daniel Jones upright. Giving Peart a full season to prepare his body for NFL-talent would be huge for someone who is a bit rawer right now.

We might not know until 2021, but it’s possible the Giants found their right tackle of the future at No. 99 overall.