New York Giants: Why It Is No Debate That Saquon Barkley Is The Best Running Back In The League 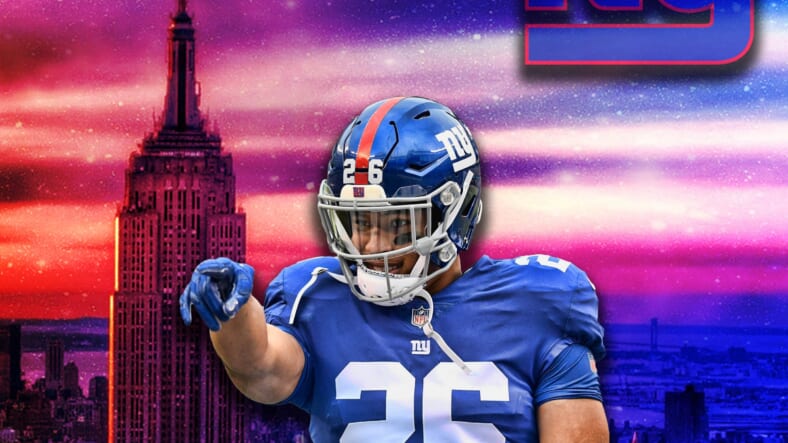 Barkley also added an insane 721 receiving yards and a solid 4 receiving touchdowns. According to Pro Football Focus, Saquon Barkley posted 1.54 yards per route run which ranked 10th among all running backs in the NFL in 2018.

This aspect of Saquon’s game is so far ahead of his competition for the league’s top running back spot. Barkley’s value as a receiver is what separates him from the rest of the pack.

In 2018, Saquon had more receptions, receiving yards, and receiving touchdowns than Ezekiel Elliot and Todd Gurley had in 2018 and more than Le’Veon Bell had in 2017. This was all achieved by Saquon Barkley in his rookie season.

Saquon Barkley will only get better. Entering his second season, the New York Giants have rebuilt their offensive line. The improved offensive line will lead to even more production out of Saquon Barkley. In addition, the absence of Odell Beckham Jr. could propel Saquon Barkley to finish 2019 with over 1,000 yards on the ground and through the air.

Saquon could catch too ?

No One Can Tackle Saquon

Another impressive stat: 872 of Saquon’s 1,307 rushing yards came after contact. The rookie was practically impossible to take down. Saquon Barkley also lead the NFL in scrimmage yards in 2018. His 2,028 yards from scrimmage also lead all running backs, rookie or not.

Saquon Is A Threat To Score On Every Play

After breaking off a 78-yard touchdown run against the Washington Redskins, Barkley joined NFL Hall of Fame wide receiver Randy Moss as the only two rookies in NFL history to rack up five touchdowns of 50 yards or more during their NFL debut season.

Barkley had nine plays of 40-plus yards last year, five more than any other running back in 2018. He had 15 total touchdowns (rushing and receiving combined). The rookie’s longest play of the season was his 78-yard touchdown run against the Washington Redskins.

Heading to his first #ProBowl…

Every @Saquon touchdown so far! ??? https://t.co/PcAa2LEuUl

Saquon Barkley is the most valuable running back in the NFL. His god-gifted abilities as a runner and as a receiver will propel him into continuous domination for the foreseeable future with the Giants. 2018’s Offensive Rookie of the Year is going to smash even more records in 2019. Giants fans, get ready to see this young man reign supreme over the NFL’s running backs for at least a decade.