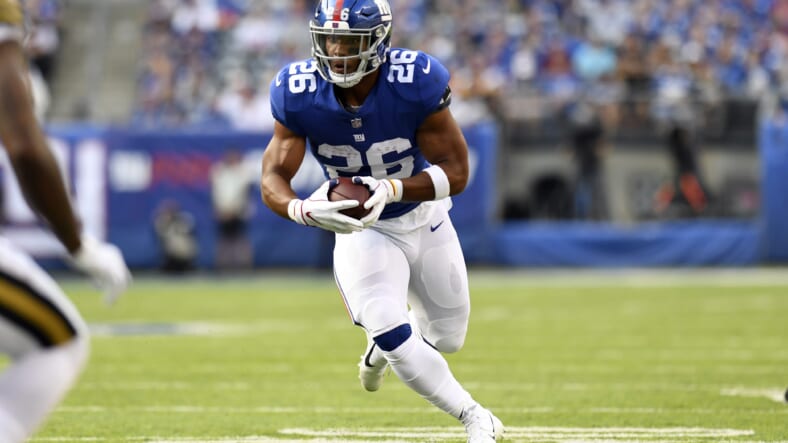 The New York Giants will face off in week 17 against the Dallas Cowboys on Sunday. The 5-10 Giants will be playing already eliminated from the playoffs. The Cowboys will be playing with a playoff spot already clinched. Despite being eliminated, Giants fans do have something to look forward to: Saquon Barkley.

Saquon Barkley has had a monster rookie season. He is a major candidate to win offensive rookie of the year. This season, Barkley has rushed the ball 244 time for 1,198 yards and 10 rushing touchdowns. In addition, Saquon has totaled 87 receptions for 688 receiving yards and 4 receiving touchdowns. These numbers put Barkley in position to break two big records on Sunday.

The NFL record for the most receptions by a rookie running back in a season is held by Reggie Bush with 88 receptions. Barkley is one reception away from tying that record, but odds are he hauls in two or more receptions and breaks it.

If Saquon gains three receptions, he will tie Odell Beckham Jr.â€™s record for most receptions in a season by a rookie in the franchiseâ€™s history history.

Saquon Barkley currently has 1,886 total yards from scrimmage. If he is able to gain 114 total yards on Sunday, Saquon will join elite company.

Barkley is already one of the best backs in the NFL. The sky is the limit for the rookie. On Sunday he can prove that he has the chance to be one of the great running backs to ever play in the NFL. It all begins with a historic rookie season.