New York Giants: Who is the ideal offensive lineman to select at 4th overall? 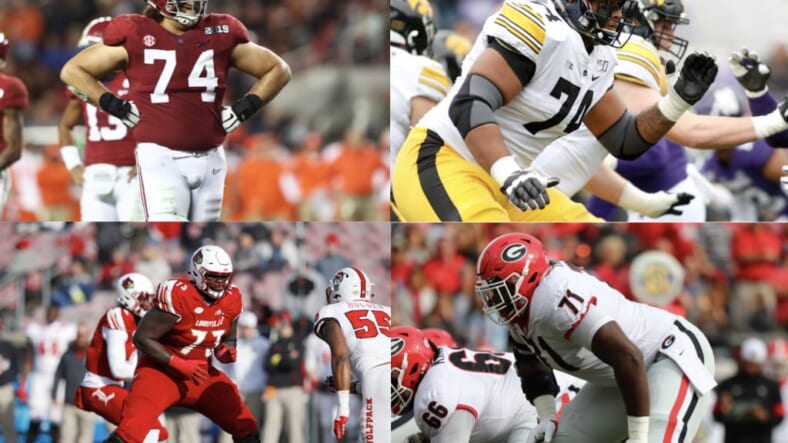 The New York Giants are heading toward the 2020 NFL Draft with heads of steam after addressing the defense significantly this offseason. Signing James Bradberry and Blake Martinez represent upgrades at the cornerback and linebacker positions, but the offensive tackle position is still lacking talent on both sides.

The Giants, however, could spend the 4th overall pick on a tackle if they elect to forgo the opportunity to land Isaiah Simmons to plug in a playmaker at the second linebacker spot. It will be incredibly difficult to pass on a player like Simmons, who represents one of the best players in the draft and a defensive staple for years to come.

An offensive tackle makes the most sense for the Giants, as they let Mike Remmers walk in free agency and re-signed Cameron Fleming to provide competition at right tackle along with Nick Gates.

Who’s the ideal tackle at 4th overall for the New York Giants?

Reports during the NFL Combine suggested that GM Dave Gettleman highly regarded Tristan Wirfs, and he posted incredible numbers, including a 40-yard dash of 4.85.

His elite body type with incredible athleticism makes him one of the best prospects in the draft. His ability to stand his ground and utilize core strength has been apparent during his time in Iowa, but make no mistake, he’s as smooth of a mover as they come. He won’t be the explosive blocker you see in players like Quenton Nelson, but he will use finesse to get the job done. There’s room for development, but he has the skill-set to be a long-term tackle for the Giants.

Jedrick Wills represents another fantastic option for the Giants early on in the first round. Wills is a bit below the ideal size for a tackle (6-4, 312lbs), but he’s quick and fundamentally sound. His athleticism has allowed him to compensate for lack of size, contributing great agility and body control in the trenches. NFL.com’s Lance Zierlein believes he’s ready for the next level: “His game is tailor-made for the NFL, and his range of success is good starter to All-Pro.”

Watching Wills in his pass protection sets, he is by far the most refined in that category. His vision and ability to handle stunts are far beyond the skills of Wirfs, who takes poor angle sets at times with questionable footwork.

One great video to learn about the two:

I believe these are the two best options for the Giants if they spend the 4th overall pick on a tackle. Of course, Mekhi Becton and Andrew Thomas remain reliable options, but Wirfs and Wills represent the most upside of the four.

Becton is incredibly quick for a player of his size (6-7, 364lbs). He fits perfectly into running schemes with his size and power — would benefit Saquon Barkley when running outside the tackles. Pass pro is where he will struggle in the NFL, as he can lack balance at times, but his set-up is better in pass pro than expected for a man of his size. Zierlein believes his size usually would hinder a player, but all of his issues are fixable with better coaching.

Andrew Thomas is the final player, who’s very much in the conversation for the Giants. The former five-star prospect was stellar for the Georgia Bulldogs when he initially joined the offensive front in his rookie season. Since moving to left tackle, he has earned plenty of accolades to promote his quality. Aside from displaying consistency in the healing department, he had a great 2019 season, earning first-team Associated Press All-American and first-team all-health awards.

Thomas is a player who you can count on week in and week out, making him another great player to consider with the Giants’ pick. Personally, I’m going with Jedrick Wills if I’m Dave Gettleman, as he offers the most NFL-ready abilities out of all four. His size is a tad concerning but his fundamentals are sharp.