New York Giants: What should we expect Saquon Barkley’s workload to look like come Week 1? 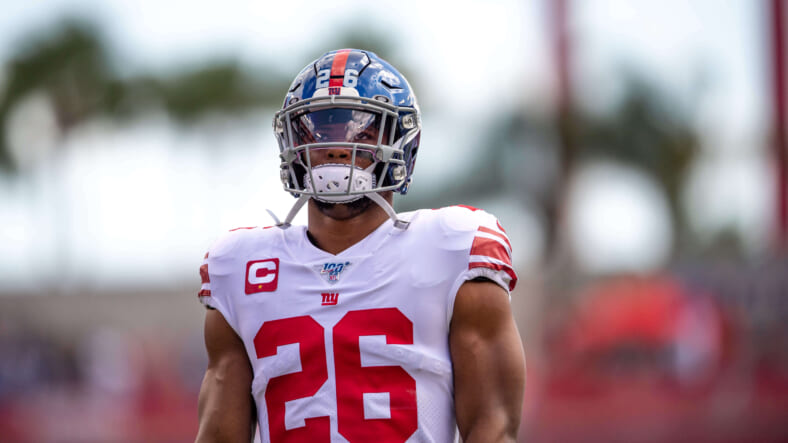 Come the New York Giantsâ€™ 2021 season opener against the Denver Broncos on September 12, the expectation is that star running back Saquon Barkley will be nearly 100% healthy.

Barkley has been working diligently to rehabilitate a torn ACL, MCL, and partially torn meniscus from a Week 2 game against the Chicago Bears last year. Barkley missed the majority of the 2020 season with the injury, but heâ€™s looking to make a heroic comeback, similar to his idol, Adrian Peterson.

The impact that Saquon has on the game is unparalleled, but he has struggled to remain healthy the past two seasons, playing a total of 15 games during that time span. During his most productive season in 2018, he recorded over 2000 all-purpose yards and 15 touchdowns, including 5.0 yards per carry.

Ultimately, without Barkleyâ€™s explosion and quick-twitch abilities, heâ€™s not the same player, and that is the factor we should have our eyes on during training camp and preseason.

The New York Giants will be cautious with how quickly they move Barkley along:

Thereâ€™s a solid chance Barkley doesnâ€™t make an appearance during the preseason, waiting until Week 1 against Denver to showcase his qualities. However, based on how the coaching staff handled Xavier McKinney last year after he suffered a broken foot during training camp, Barkleyâ€™s usage could look something like this:

In week one, I would anticipate Barkley receiving about 10% of snaps on offense, gradually increasing over the next four weeks until he reaches 100% health. The idea is that even if Barkley is ready to roll, his body will need to adjust to football once again, coming off a significant injury â€” it is best to ease him into the starting unit rather than shock his newly restructured ligaments.

â€œI think itâ€™s mostly his change of direction youâ€™ll be looking at, but itâ€™s also how explosive he looks,â€™â€™ Tiki Barber told The Post. â€œOne of the things I always remember about Saquon is when he puts his foot down and heâ€™s ready to go heâ€™s out the door. I think his explosion will be something to keep an eye on.â€™â€™

The expectation is that Barkley will retain his explosion and power, but it will take time for him to regain his confidence regarding cutting and driving his leg into the turf, sometimes carrying bodies on his back.

The Giants made it a priority to sign Devontae Booker, who is more than capable of starting in the backfield for Big Blue while Saquon crawls his way back to form. Gradual inclusion is what we should anticipate, but as long as there are no significant setbacks, Barkley should make a full return and be his normal self by Week 6.