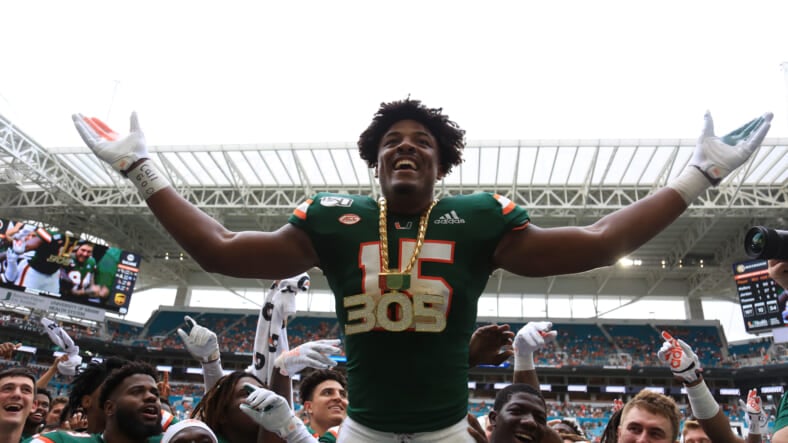 The 2021 NFL Draft is one month away. The New York Giants are preparing for an important draft to complete an impressive offseason that saw them knock the free agency period out of the park. New York signed multiple big-name free agents to address positions of need. But one position of need that the Giants did not address with a big splash in free agency was edge rusher.

The Giants signed a couple of low-cost, rotational edge rushers in free agency. Ifeadi Odenigbo and Ryan Anderson will contribute in 2021, but they are not dominant presences off the edge. It is possible that New York is still looking for that dominant edge rusher, though.

Today, the University of Miami had its Pro Day. It is officially Pro Day season, as all of the biggest schools in the country have been hosting Pro Days to show off their top draft prospects. Miami’s Pro Day drew a lot of attention today as they presented the NFL with their star pass-rushers. The New York Giants were in attendance as head coach Joe Judge stood next to Bill Belichick, keeping a close eye on Miami’s prospects. The assumption is that Joe Judge and the Giants made the trip to South Florida to get a closer look at Miami’s top pass rushers.

The top of the 2021 NFL Draft class features two impressive Miami edge rushers. Jaelan Phillips and Gregory Rousseau are both expected to be drafted in the first round of April’s draft. But outside of those top two edge rushers is another impressive Miami prospect. Quincy Roche is an intriguing name to keep an eye on outside of round one.

Gregory Rousseau had insane measurements at his Pro Day. He stands tall at 6 foot 6 and a half inches. But this lanky edge defender has some of the longest arms and biggest hands in the class. Rousseau’s hands measured in at a crazy 11 inches and his wingspan was 83 and 1/4 inches. These rare traits make Gregory an interesting prospect that has all the physical traits that could help mold him into a terrifying pass-rusher in the NFL.

Rousseau ran a solid 40-yard dash considering his size and weight. Gregory clocked in at 4.71/4.69s in the 40-yard dash. But it was his teammate, Jaelan Phillips, who really impressed scouts with his athletic testing.

Jaelan Phillips looked like an athletic freak at his Pro Day today. He ran a blazing fast 4.56s 40-yard-dash at 6 foot 5, 260 pounds. His agility drills were also impressive, as he posted a crazy 7.01s three-cone and 4.12s short shuttle. For reference, Nick Bosa’s 4.14s short shuttle tested in the 96th percentile. Phillips’s agility at his size is an extremely rare trait.

Phillips’s and Rousseau’s workouts are being compared as scouts, analysts, and fans alike debate who the better Miami edge rusher in this class is. Jaelan Phillips’s athletic testing was undeniably better than Rousseau’s and could propel Jaelan ahead of his teammate on draft boards. Many are disappointed by Gregory Rousseau’s testing numbers, which could cause him to slip in the 2021 NFL Draft.

Quincy Roche turned a lot of heads at his Pro Day. Roche, formerly considered to be a mid-round project, could rise up draft boards within the next month. Keep an eye on him as a potential target for the New York Giants as they look to bolster their edge rusher position.