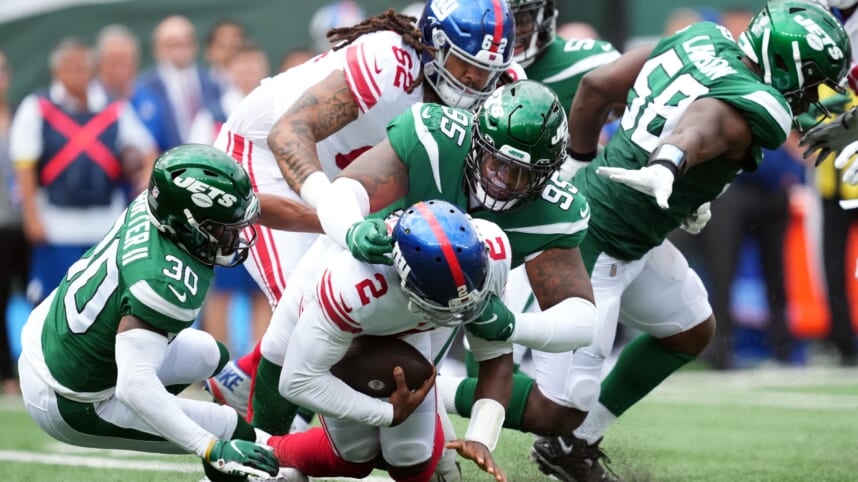 The New York Giants wrapped up their preseason today after a 31-27 loss to the New York Jets. The preseason “MetLife Bowl” saw the two teams go down to the wire with the Jets narrowly gaining the victory. The Giants played hard and had a number of backups standout as the majority of the starters did not take the field.

Denzel Mims had his name in the news earlier this week as news broke that the Jets receiver had requested a trade. He proved today why teams should be interested in acquiring his talents. Mims put up seven receptions for 102 yards and one touchdown. Considering the lack of depth that the Giants have in their wide receiver corps, maybe a potential trade between New York’s two squads could occur. Regardless, the outstanding performance of Denzel Mims highlighted the lack of depth possessed by the Giants within their secondary.

On the opposite side, New York Giants wide receiver Kenny Golladay turned heads for the wrong reasons. Golladay was one of the few offensive starters to take the field today and turned in a less-than-impressive effort. Many are criticizing Golladay for a lack of effort displayed in the game’s opening moments:

New York Giants’ third-string quarterback Davis Webb completed an impressive preseason campaign today. Davis completed 30 of his 38 passes for 202 yards, one touchdown, and zero turnovers. Webb finished the preseason 60-of-81 passing (74%) for 458 yards with 3 touchdowns and 0 interceptions. High-quality from the backup signal-caller.

The Giants’ other backup quarterback, second-stringer Tyrod Taylor, left the game early due to a back injury. He took a big hit and had to be carted off the field. The timetable is still uncertain as to when the Giants’ QB2 will be ready to return to action, but head coach Brian Daboll says that Tyrod, “should be OK.”

Rookie tight end Daniel Bellinger also left the game early with a concussion. Bellinger is the projectedWeek One starter for the Giants, so they will hope to see him heal up ahead of the regular season Week One matchup against the Titans.

Overall it was an impressive performance from the New York Jets. The Giants finished their preseason with a 2-1 record. With two weeks to go until the start of the regular season, the New York Giants and Jets will have some work to do on the waiver wire. Both teams could afford to improve their depth ahead of the start of the season.