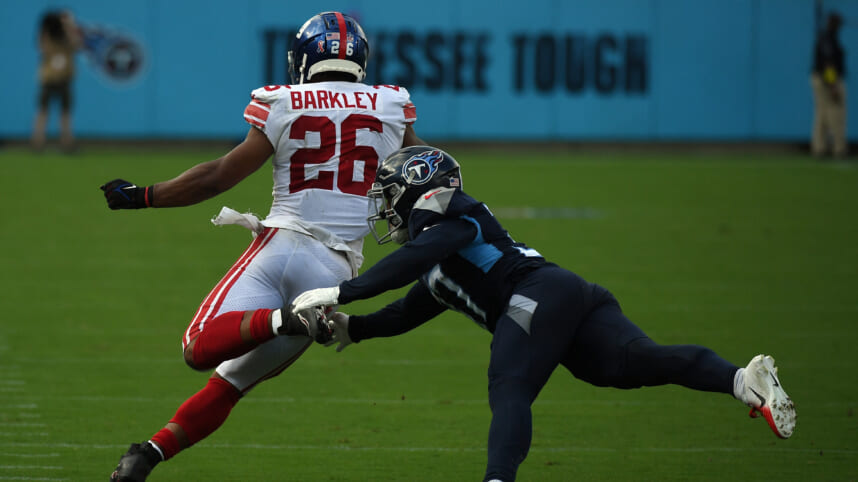 The New York Giants came away from Week 1 with a thrilling 21-20 victory over the Tennessee Titans. After a slow start in the first half, the Giants came out firing on all cylinders in the second half and sped their way to a comeback win in Week One.

Saquon Barkley looked like his old self again as he powered the Giants to victory. Barkley totaled 164 yards and one rushing touchdown on 18 carries. He also caught the reception and scored on the game-winning two-point conversion in the final minutes of the game.

It was a bold decision by rookie head coach Brian Daboll and offensive coordinator Mike Kafka. The Giants forewent the opportunity to tie with a PAT and went for the win. The risk paid off, and the Giants came away with an unbelievable comeback win as the Tennessee Titans kicker Randy Bullock pushed the ball wide left on a 47-yard attempt as time expired.

The New York Giants were scoreless after the first half of football, heading into the locker room down 13-0. The Giants put it all together in the second half, though, and beat the Titans 21-20 thanks to some late-game Saquon Barkley heroics.

It truly was a tale of two halves for the Giants’ offense led by quarterback Daniel Jones. Danny Dimes had an inconsistent game, throwing for only 188 yards and 2 touchdowns with a puzzling interception. He did just enough, though, to allow Saquon Barkley to carry the offense to the win.

In his head coaching debut, Brian Daboll secured an improbable win for the New York Giants. The Giants put up a total of 359 yards of offense while the defense managed to contain Derrick Henry and hold the Titans to 93 total yards rushing on Sunday.

The New York Giants will have their home opener next Sunday against the Carolina Panthers. The Panthers started their season off with a loss after a late-game collapse against the Cleveland Browns. The storyline of this game will be the return of Saquon Barkley. The Giants’ superstar has been a controversial figure in the Big Apple over the past couple of years but has seemingly silenced the critics, leading the Giants to their first 1-0 record in the past six seasons.