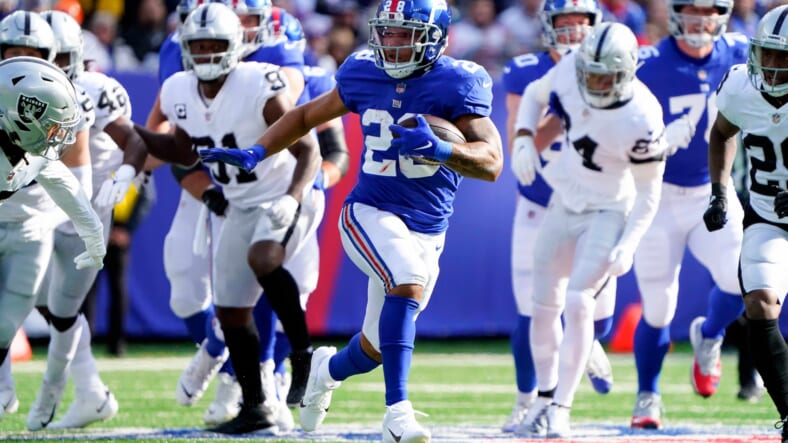 The New York Giants gained their third win of the season today after a big upset victory over the Las Vegas Raiders. The Raiders’ two-game winning streak came to an end at the hands of the Giants who improved their record to 3-6 after a 23-16 victory over Las Vegas.

The New York Giants defense led the team to a big victory on Sunday. Xavier McKinney had a huge breakout performance that saw him intercept Derek Carr twice and take one back for a 41-yard pick-six.

The Giants offense ran primarily with a run-first attack that led Devontae Booker to a stellar performance. Booker rushed for 99 yards on 21 carries and also tacked on 23 receiving yards with 3 receptions. Devontae Booker and the Giants’ backfield carried the Giants’ offense to victory.

Daniel Jones completed 15 of 20 passing attempts for only 110 yards and 1 touchdown. He lost a fumble but threw no interceptions. Jones kept the ball clean through the air and worked with what was given to him. New York’s passing attack left a lot to be desired, however, and will be an area for the team to improve on going forward.

The Giants are heading into a bye week after this victory at 3-6. After starting the season 0-3, New York has bounced back, going 3-3 in its last six games. Luckily, the team is finally getting healthy, seeing Kenny Golladay and Kadarius Toney both take the field this Sunday. With an upcoming bye week to rest up, the Giants will be looking to come out of the break healthy, energized, and motivated to turn their season around.