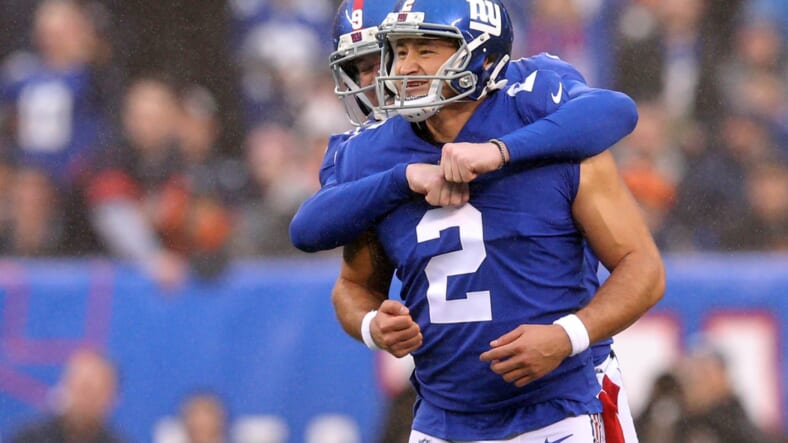 Strangely, the New York Giants might have a new face at kicker soon.

The Giants tried out a pair of kickers in Michael Badgley and Aldrick Rosas. Rosas was with the Giants and a Pro Bowler in 2018 before being released in 2020 following an offseason arrest.

The team has held tryouts for two different players at the position, Michael Badgley and Aldrick Rosas. The latter name will be familiar to Giants fans, of course, because of a previous stint for the Giants where he was a solid starter and had a Pro Bowl appearance.

Despite that success earlier in his career, Rosas ended up off the team last year after being sentenced to three years of probation for a hit-and-run incident.

Rosas had stints with the Jaguars and the Saints before ending up released once again on October 5th.

Michael Badgley also played for three teams before most recently being waived by the Titans on September 13. He has an 80% made field goal rate through his career and his longest field goal was 59 yards.

It remains to be seen why the Giants are looking for kickers at the moment. Graham Gano has played fine for the team, and has made all but one of his field goals this season as well as every extra point.

It’s possible that the Giants are looking into other kickers because of a health concern that just hasn’t come up in the public eye yet. Because Gano has mostly performed up to standard this season, it seems likely that the answer in this situation is somewhere along those lines.

With that being said, Gano hasn’t appeared on the injury report yet so if there is a problem, it isn’t a large enough one to immediately show up on the report.