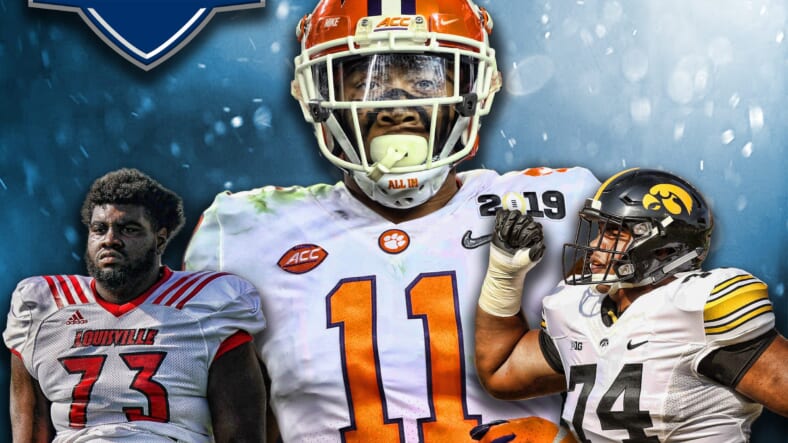 The 2020 NFL Draft is right around the corner. The Draft will begin on April 23 this year. In preparation for the NFL Draft, the NFL Scouting Combine will begin this week.

The Combine is a crucial part of the draft process. Teams finally have the chance to meet and interview this year’s prospects. TheÂ New York GiantsÂ are picking fourth overall in this year’s draft and will have their pick at some of the top prospects in the class. With the 2020 NFL Scouting Combine about to kick off, let’s take a look at three of the top prospects to keep an eye on for the Giants in 2020.

One of the draft’s most hyped prospects is Clemson’s do-it-all linebacker, Isaiah Simmons. Simmons played nearly every position on Clemson’s defense and is an exceptional athlete.Â

Dane Brugler of The AthleticÂ said, “They might rename the combine after Isaiah Simmons after he is done with it.” According toÂ Albert BreerÂ of MMQB, one college scouting director forecast to Breer that Clemson LB Isaiah Simmons will run in the low 4.4s, and his “jumps are gonna be nuts.”

Isaiah Simmons is going to test extremely well in the Combine drills this week. He has the speed, size, and athleticism to drop jaws. Simmons has been linked to the Giants on many occasions, so expect them to keep an eye on the draft’s top linebacker.

According toÂ Ralph Vacchiano of SNY, the New York Giants are “in love” with Iowa offensive tackle Tristan Wirfs. Wirfs is already expected to be one of the Giants’ top targets in the 2020 NFL Draft. But with a strong performance at the 2020 NFL Scouting Combine, Tristan could make himself a must-draft target for the Giants who have a severe need at offensive tackle.

Tristan Wirfs is expected to dominate the 2020 NFL Scouting Combine. He is a mammoth of a human being, standing at 6 feet 5 inches and weighing 322 pounds. Despite this, Tristan can move at a somewhat rapid pace. He is expected to run a sub-4.9s 40-yard dash. He would be only the fifth offensive tackle ever to accomplish this feat and the only offensive tackle to run a sub 4.9s while weighing 322 pounds.

Tristan Wirfs has been described as aÂ “300-pound man that moves like a dancer.” But he also moves weights like ragdolls. TristanÂ broke Iowa’s hang clean recordÂ with four reps of 450 pounds last year. Wirfs is sure to impress during the 2020 NFL Scouting Combine and could make his way surging up teams’ draft boards.

Mekhi Becton is a massive human being. He is maybe the definition of the term “hog molly” that general manager Dave Gettleman is known to use. The Lousiville offensive tackle towers over the competition at 6 feet 7 inches. He also weighs in at a humungous 369 pounds.

Becton’s size is rare. But, what makes him so unique is the athletic ability he has combined with his otherworldly stature.Â Lance Zierlein of NFL.comÂ described Becton as an offensive tackle with an “enormous frame complemented by surprisingly nimble feet and functional athleticism to handle either tackle spot.” The Giants could draft Mekhi Becton to play left tackle or right tackle depending on how much they do or do not trust Nate Solder.

The Giants will be able to find a franchise building block in the 2020 NFL Draft. But that all starts with the 2020 NFL Scouting Combine. This is a crucial step in the draft process, and these three players will need to live up to expectations and impress New York if they want to get selected fourth overall.