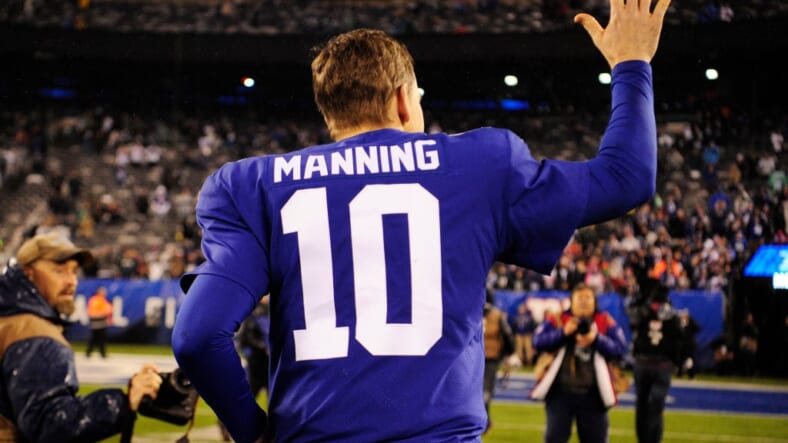 EAST RUTHERFORD, NEW JERSEY - DECEMBER 29: Eli Manning #10 of the New York Giants waves to fans while leaving the field after the second half of the game against the Philadelphia Eagles at MetLife Stadium on December 29, 2019 in East Rutherford, New Jersey. (Photo by Sarah Stier/Getty Images)

Friday morning was an emotional time for New York Giants fans, as quarterback Eli Manning announced his retirement in front of a crowd of reporters, family, and friends.

Manning featured with the Giants for 16 seasons, amassing incredible achievements.

His speech was short and to the point, expressing his appreciation for the family, he had accrued during his time with Big Blue and ensuring that he was only ever going to be a Giant.

Eli Manning: “No one loved and appreciated wearing the Giants uniform more than I have.”

â€œTo the Giants fans, youâ€™re definitely unique, and I love you for thatâ€

This was the most emotional part of the conference IMO…

John Mara really hit me in the feels with this one.#giantschat pic.twitter.com/Yf17yLvd7u

John Mara’s speech was full of tears and inability to speak, as his relationship with Manning bled through his word. At the end, he powerfully stated, “no Giant will ever wear #10 again.”

Manning will also be inducted into the Giants Ring of Honor in 2020, joining some of the biggest and brightest names in football. While this day was full of tears and sadness, it’s also a moment of happiness, a fresh start into the future, and the appreciation of class and dedication for 16 years. Manning epitomized quality and respect, being his true self throughout his career.

Not only will Eli’s memory be alive for eternity, but we will never forget the magnificent moments and miracles he orchestrated during his career.

Eli Manning is open to being a part of the Giants organization in the future! #giantschat pic.twitter.com/ZcjDOLpA4f

Even Tom Brady took to Twitter to ensure Eli was appreciated for his efforts, stating:

“Congratulations on your retirement, and a great career Eli! Not going to lie though, I wish you hadnâ€™t won any Super Bowls.”

A friendly slight towards Eli, but with the utmost respect.