New York Giants: The 2020 season is make or break for Dave Gettleman 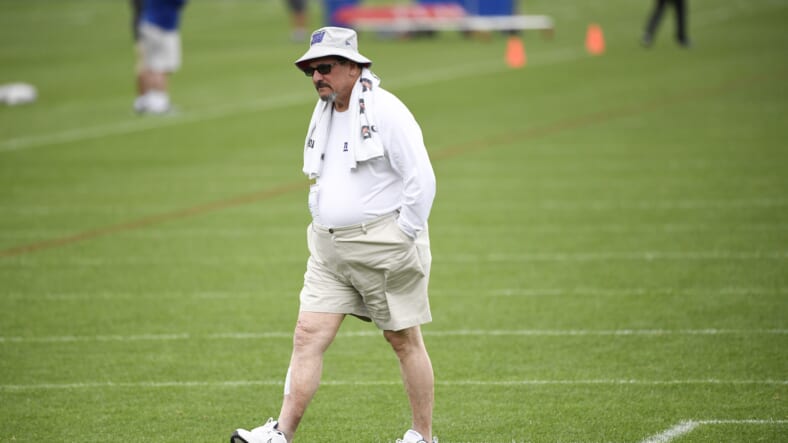 Did New York Giants‘ GM Dave Gettleman save his job with his latest draft haul?

Going into the third year of a rebuild often shows more results, and the New York Giants have experienced thus far. Gettleman started his tenure in New York by drafting Saquon Barkley with a second overall pick in 2018, claiming that the team could win while rebuilding.

He later retracted those comments and stated their goals were a bit lofty for the state of the franchise. He reverted to a general rebuild that included the overhaul of the entire roster and drafting of youth talent to build a foundation.

At this point, only four players remain from the Jerry Reese era — tight end Evan Engram, defensive lineman Dalvin Tomlinson, wide receiver Sterling Shepard, and running back Wayne Gallman. Three of these players are position players who have either struggled with injuries or are on the fringe of being cut.

The Giants recently picked up Engram’s fifth-year option, keeping him around for 2021 and guaranteeing his contract. There is a possibility they attempt to trade him at the deadline next season, but they also extended Sterling Shepard on a four-year deal in 2019. Concussions have put his career in jeopardy since. Tomlinson had his best campaign in 2019, thanks to the addition of Leonard Williams, and Gallman is on the cusp of being released after the signing of Dion Lewis.

However, Gettleman has failed to piece together a successful team after three off-seasons and two regular-season campaigns. The Giants are now on their third coach in three years, having moved on from Pat Shurmur this off-season in favor of Joe Judge, formally the special-teams coordinator for the New England Patriots.

This past draft clearly had Judge’s stamp on it, considering the type of players they targeted. However, this haul was a bit different and more focused on building the depth at weaker positions and solving the offensive line once and for all.

Ultimately, this new group of players could have saved Gettleman’s job. This was essentially his last shot at being retained by the Giants, who are in dire need of development and signs of progress. The last time the organization tasted the playoffs was in 2016 when they overspent on defensive free-agents and were knocked out in the first round by the Green Bay Packers. The infamous boat trip, including Victor Cruz, Odell Beckham Jr., Sterling Shepard, and Roger Lewis, was suspected of throwing them off their game. Beckham dropped multiple passes, including a touchdown grab.

Moving forward, the Giants must see some sort of positivity in 2020. Despite having an incredibly difficult schedule ahead of them, they now have the pieces in place to at least compete and stay in football games.

If Joe Judge can piece together a successful season with this schedule, zero offseason & a young team…

We are in GOOD shape.

Judge must bring a more detailed and fundamentalist approach toward their mentality, and making the right in-game decisions is a significant part of that. Ultimately, Gettleman is the last remaining scapegoat for the Giants, and if they fail to piece together a respectable season in 2020, he will indeed be relieved of his duties.