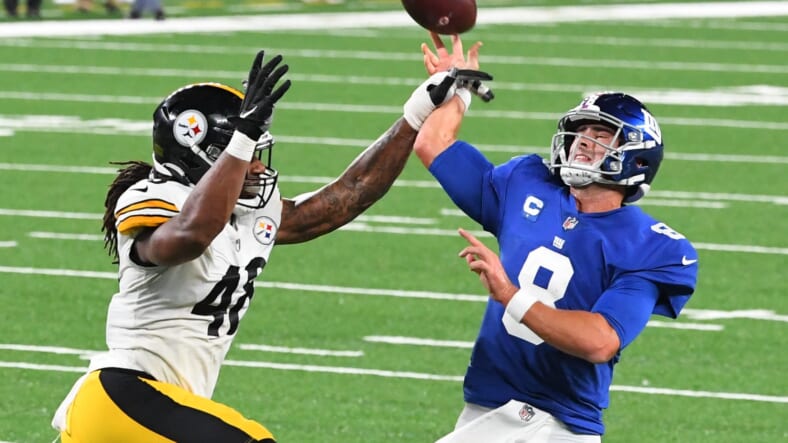 There are a few simple ways that New York Giants quarterback Daniel Jones can take a step in the right direction next season. Ranging from reducing his fumbles to increasing his touchdown passes, Jones has been gifted more offensive playmakers to utilize in the passing game.

There was a point in 2020 where Jones was stringing together a few successful performances, but a hamstring injury that significantly debilitated his ability to move hurt his progression. He missed two games due to the injury, and according to head coach Joe Judge, he shouldâ€™ve missed the entire season, but the tough QB pushed on anyway. Knowing his team had a chance at the postseason, Jones did everything in his power to stay healthy and start games for the Giants, even though they ended up missing the postseason by a slim margin.

â€œLook, Daniel is the last guy thatâ€™s going to use anything as an excuse,â€™â€™ Judge said on ESPN 98.7FM NY radio. â€œWhat I would say about the injury last year is it was much more serious than maybe people thought on the outside. I would say probably 90 percent of players in the league who would have had that injury, including quarterbacks, would have been on IR for the remainder of the year. Thatâ€™s just the reality of it.

While Jones wasnâ€™t throwing touchdown passes, he was showing consistency and even above average play in the passing game, recording a 67.5% completion rate against Washington in week nine and a 75% completion rate against Philadelphia in week 10. He suffered a hamstring injury against Cincinnati in week 11, and his statistics following that game saw a major drop-off. Moving forward, that should actually indicate that Jones is capable of playing at a higher level, and we have to remember what he had to work with in 2020 was nothing short of inadequate.

This off-season, the Giants have added a bonafide top receiver in Kenny Golladay, drafted Kadarius Toney out of Florida, who is an instant playmaker, and expect Saquon Barkley back from a torn ACL.

The transition of talent on offense for the New York Giants is insane:

Jones is going from Wayne Gallman to Saquon Barkley and Sterling Shepard as his WR1 to Kenny Golladay. That is not even to mention the addition of Kyle Rudolph, John Ross, and consistency in the offensive scheme.

On paper, it is hard to justify Jones regressing in 2021, and based on the weapons he has around him, he should see a significant step forward in the passing game specifically. However, reducing his turnovers should be the primary focus, as he threw 10 interceptions and fumbled the ball 11 times last season, decreasing his number by seven compared to his rookie season, where he fumbled 18 times.

Depending on how the Giants develop their offensive scheme, this offense could land in the average category, which would be a significant improvement, or even take a further step in the right direction. Most are skeptical that coordinator Jason Garrett is capable of devising a system that thrusts this offense into the above-average category — but donâ€™t discount the additions of Russ Callaway and Freddie Kitchens as a senior offensive advisor, compared to his tight end specific role in 2020.

Callaway comes from an air raid system in the SEC with Samford, and Kitchens has experience as an OC and head coach at the NFL level. I believe their offense will be more downfield-centric and utilize creativity and pre-stop motion to get playmakers open.

It is extremely difficult to envision an offense that is worse than the one the Giants put on the field last season. They ranked 31st in points allowed per game, better than only the Jets, who hosted one of the worst offenses in NFL history.

Again, if Daniel Jones can put forth a successful 2021 campaign fueled by their most recent additions, the Giants will have two first-round picks to plug any remaining holes on their roster in 2022 and hopefully eye a deep postseason run.