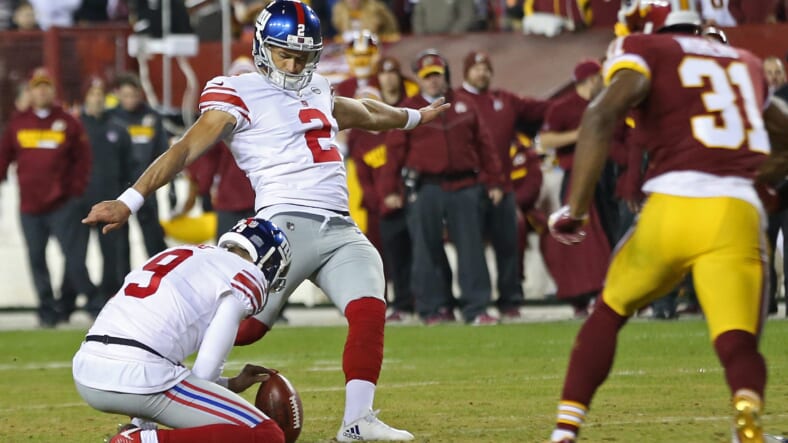 The NFL’s new league year begins on March 13th. That is the day that NFL teams can officially sign free agents and make trades. Until then, teams can only communicate with their own players and impending free agents.

With the new league year coming up, the New York Giants have gotten to work resigning their free agents (or letting them walk for nothing). On Wednesday, the Giants made a few decisions on their exclusive rights free agents.

One of the Giants’ top in-house free agents this offseason was their kicker, Aldrick Rosas. The Giants officially tendered Rosas on Wednesday. This move brings him back next season at the minimum salary.

This move was a no-brainer for the Giants. Aldrick Rosas was arguably the best kicker in the NFL last season. Rosas had a 97% field goal percentage in 2018, making 32 of his 33 attempts. Aldrick was Pro Football Focus’s highest graded kicker of the season with an 88.7 overall grade.

Week 13 was Rosas’s best game of the season. He won Special Teams Player of the Week. In week 13, Rosas went 3/3 on field goals, including a game-winner in overtime. Aldrick even nailed a 57-yard field goal at the end of the first half, which was a franchise record for the longest field goal in Giants history.

If Rosas can perform like this again in 2019, expect him to get a proper long-term extension next offseason.

The Giants signed Corey Coleman back in November after he had been cut by the Buffalo Bills. Coleman has had a tough time staying on a roster. He was drafted by the Cleveland Browns in 2016 but played there for only two seasons. He never even made the Bills’ 53 man roster.

Once the Giants signed him, Coleman got limited playing time. He played in 8 games and caught 5 passes for 71 yards. Coleman also fielded 23 kickoffs. He showed the potential to be a great kick returner for the Giants in the future.

According to Ian Rapoport, Corey Coleman showed enough flashes in his short stint to warrant a longer look from the Giants. Along with Rosas and the others, Coleman received his tender on Wednesday worth $2.025 million. The Giants will be hoping to turn Coleman into a legitimate receiving threat in 2019.

The Giants’ starting center at the beginning of the season went down with a season-ending injury in week 2.

GM Dave Gettleman has noted on multiple occasions how well Jon Halapio was playing prior to breaking his leg. According to Pro Football Focus, Halapio had the 3rd best pass blocking grade (85.2) from week 1 among centers with at least 50 offensive snaps.

Jon Halapio will likely be the Giants’ starting center in 2019. This is why he received an exclusive rights tender to keep him around for the 2019 NFL season. If Jon Halapio can prove that his 2 weeks of solid play in 2018 were not a fluke, Halapio could potentially play his way into a long-term contract extension in 2019.

The Giants tendered exclusive rights free agent Elijhaa Penny as well. Penny was the Giants’ fullback in 2018. Penny is a solid receiving fullback who can contribute as a blocker, too.

He was Pro Football Focus‘s 4th highest graded fullback in 2018 with an overall grade of 68.6. He is a versatile fullback who performed well in 2018. Penny could be the fullback for the Giants for years to come if he continues to play at this level.