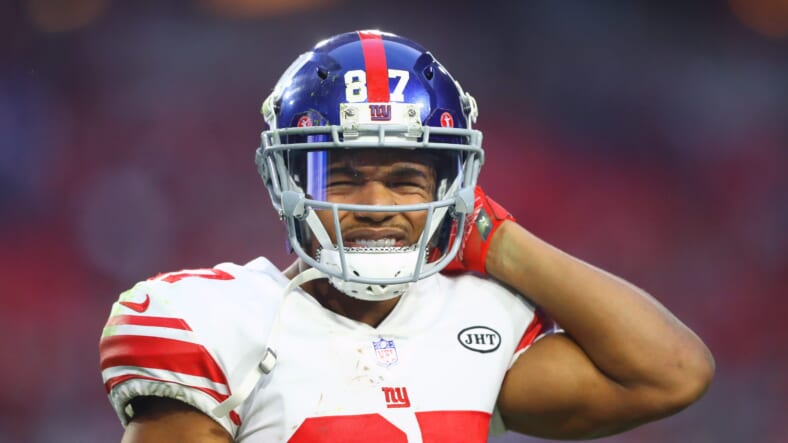 The New York Giants team and organization seems to have faith in Daniel Jones going into 2021. Despite Jones regularly ending up on the other side of complaints from the fans, the Giants front office and staff have been nothing but committed to the third year QB in all their statements this offseason. Other members of the roster have also painted a popular picture of Jones, including the receivers he’ll play with this season.

Sterling Shepard is one of those satisfied receivers, and had some things to say to the New York Daily News about Jones’ leadership. Specifically, the trip to Arizona that Jones led earlier in the offseason was brought up. During this trip, Jones worked with other members of the offense to get some early practice in under Jason Garrett’s system.

“It just shows his leadership skills in getting everybody together and trying to get some of the timing down. Thatâ€™s important for offense, especially receiver to QB. Good session. We had a great time out there getting to know each other and bonding with each other, as well. Just shows you [Jonesâ€™] maturity level in being able to set something like that up,” Shepard said.

Shepard also spoke during the same interview about the Giants adding Kadarius Toney, another receiver, with their first round pick.

He said that he’s not looking at Toney as new competition – and his explanation is pretty on point. Him and Toney aren’t the same player, with the rookie having a more physical and explosive game.

“No. Weâ€™re different players. We needed weapons. Thatâ€™s just another weapon added to the team and to the offense, and he also brings some value in the return game.”

Daniel Jones has more weapons than ever this year

Many have called this the make or break season for Daniel Jones. His performance might determine whether the front office stays committed to him or starts looking at other options. However, Jones will have more weapons than ever to help him this season.

Sterling Shepard and Darius Slayton, the leading receivers from the last couple of seasons, are back – and they’re joined by the additions of Kenny Golladay and Kadarius Toney. The Giants even added former Bengals pick John Ross, bringing another former first round name to see if he can recover his previous upside.

At the tight end spot, Jones will have two pass catching tight ends in Evan Engram and Kyle Rudolph. And of course, Saquon Barkley is expected back for week one. The elusive running back has a reputation for being a weapon in the receiving game, not just on the ground.

This all, however, means there will also be less excuses for Jones. After all, if there’s more poor performances this year, the excuse of not having weapons likely won’t hold up.

For now, though, anyone in the organization will tell you that they have faith in Jones avoiding that pitfall and making a big step up in 2021.