New York Giants: Should Daniel Jones be in the Run for Starting QB Job? 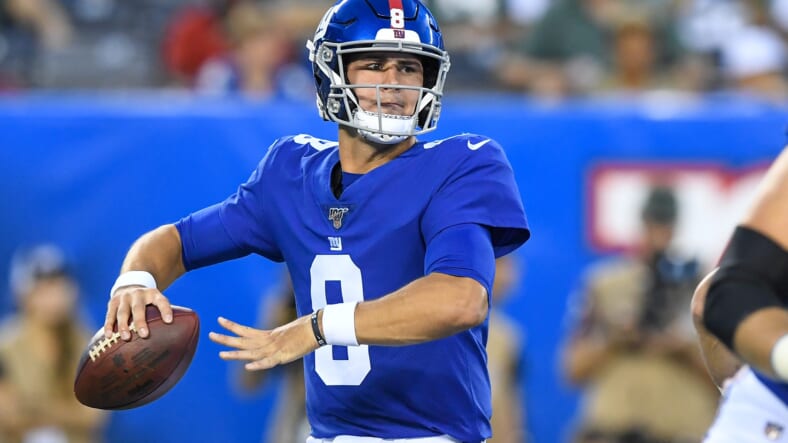 The New York Giants have made it pretty clear they aren’t hosting a quarterback competition. Pat Shurmur has stated multiple times Eli Manning is the starting quarterback. Heâ€™s also shot down questions about a competition anytime he’s been asked. This would all be fine and dandy if Daniel Jones looked like your typical rookie quarterback, but he hasn’t.

Daniel Jones began his preseason with a stat line of 5/5 for 67 yards and a touchdown against the Jets. While some thought it was a rather fortunate start he looked just as good, if not better in the next game.

Here’s his stat line in week 2:

It’s fair to say heâ€™s had his rookie growing pains with his fumbled snap and strip-sack but his passing numbers are nearly perfect. Through 2 weeks of the preseason, his passing total is 16/19 for 228 yards and 2 touchdowns with no interceptions. 1 of his 3 incompletions was a clear drop by Scott Simonson.

He’s also connecting with his pass catchers on all levels of the field. The pass to Cody Latimer traveled over 35 yards down the field and was right on target. His two touchdown passes in the preseason were thrown directly into the end zone from 12 and 15 yards out. Most of his short passes have allowed his pass catchers to maintain their stride for yards after the catch. Pat Shurmur said this summer they haven’t seen â€anything he can’t do.â€

While Pat Shurmur says the coaches are less surprised by Daniel Jonesâ€™ success than the outside world, he mightâ€™ve expected less immediate success for the rookie by shutting the door on a quarterback competition. This would explain why Danielâ€™s individual performance hasn’t even been a factor in the discussion thus far.

As much as the team liked him throughout the draft process they shouldâ€™ve known he was capable of such a hot start.Â Jones was considered one of the more â€NFL readyâ€ quarterback prospects by many talent evaluators, while they didn’t exactly love his â€ceiling.â€

This makes the likelihood of â€playing too earlyâ€ very slim for Jones. Getting on the field too early has been counterproductive for some rookie quarterbacks at times but this has mostly been the case with prospects who came from â€Air-Raidâ€ offenses. Daniel Jonesâ€™ offense under David Cutcliffe was considered more â€pro-styleâ€, giving Jones a smoother transition than other quarterbacks.

No one should blame the team for considering Eli Manning the starter leading up to training camp. Once camp opened Daniel looked like less of a project and more of a promising young player. Then half the preseason came and went with Daniel looking nearly perfect as a passer in both games.

Thereâ€™s another layer to this situation that the coaches and front office would love to avoid. Itâ€™s the reason they parted with former New York Giants who had plenty of talent, itâ€™s the distractions. Dave Gettleman has said time and time again itâ€™s his job to â€œeliminate distractions.â€ The team would love to avoid being asked about Eli and Daniel constantly, but this will not end until the team moves on from Manning to let Jones get in the driverâ€™s seat for this franchise. The team can say they are unbothered but this is the last major distraction left on the roster. Dave Gettleman has proven before he doesnâ€™t mind taking care of them even when theyâ€™re â€œtough decisionsâ€ for the New York Giants. If the team feels Jones is ready to play before week 1, they could make the earth-shattering move before it becomes a routine topic of discussion every single week.

Based on how well heâ€™s performed so far, it wouldn’t be crazy for Shurmur to give Jones an opportunity against the Bengals starting defense at some point on Thursday night. Heâ€™s arguably earned snaps against a first-team defense. Daniel Jonesâ€™ performances should begin to have a seat at the table in this decision of who starts at quarterback in 2019.Â