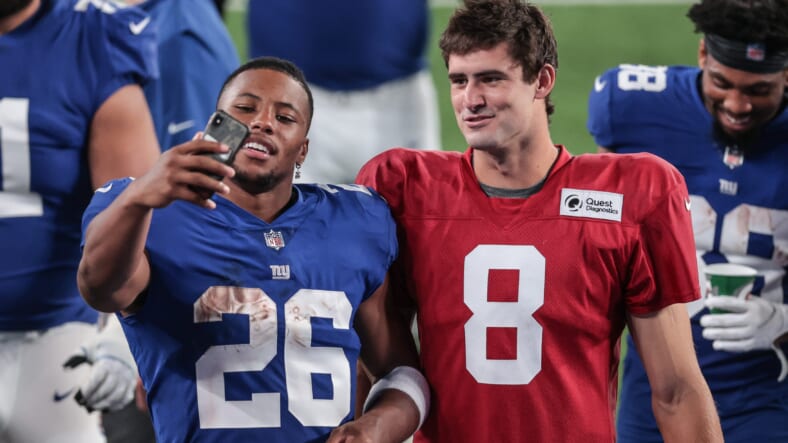 The New York Giants received a huge boost to their offense this week as superstar running back Saquon Barkley was activated off the PUP list and returned to practice. Fans are excited for Barkley to rejuvenize the Giants’ rushing attack in 2021 and give them the ability to move the ball efficiently on the ground. But Saquon’s return not only impacts the running game. His return also opens things up for Daniel Jones in the passing game.

Saquon Barkley as a receiver

Saquon Barkley is one of the best running backs in the NFL. Every time he has the ball in his hands, there is a chance he will take it to the end zone. This is true for Barkley is a rusher, and even as a receiver. In his historic rookie season, Saquon set a franchise record with 91 total receptions as a rookie. He also notched 721 receiving yards and 4 receiving touchdowns.

The Giants have one of the NFL’s best receiving backs in Saquon Barkley. Even in his banged-up 2019 season, Barkley totaled 438 receiving yards. Through one-and-a-half games in 2020 he caught 6 passes for 60 yards.

With the improvements that the Giants made to their receiving corps this offseason, Saquon might see less volume as a receiver. But less volume could lead to greater efficiency. The ball will be spread out more to New York’s talented weapons. As the defense keys in on a receiver like Kenny Golladay, they could forget to cover Saquon out of the backfield as he rips them down the sideline on a wheel route. This same principle works inversely, too.

If a team stacks the box to try to slow down Saquon Barkley, they leave wide receivers like Kenny Golladay, Sterling Shepard, and Darius Slayton in one-on-one coverage. These are talented wide receivers that absolutely have the ability to win one-on-one matchups. As teams hone in on stopping Saquon, they will squeeze their defenses into tighter formations to defend against the run, allowing the Giants’ offense to spread out and attack the defense through the air. Daniel Jones will have a fun time throwing to more open wide receivers in 2021 after his previous group failed to create separation in 2020. There is no understating the impact that Saquon Barkley will have on the New York Giants offense.