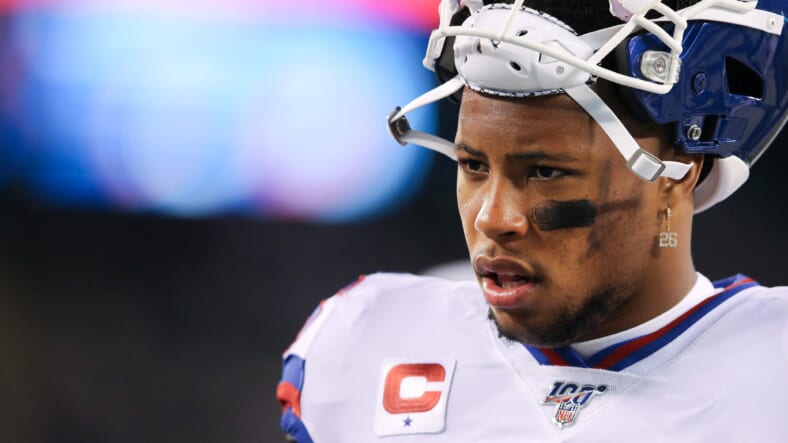 Joe Judge has gotten a chance to work with New York Giants back Saquon Barkley for one season, and has made a good impression so far. Of course, the bulk of that season was spent with Barkley sitting out because of an ACL tear. The injury came quickly into the year and forced the Giants to change their strategy on offense all around. It was also a big blow to the overall hopes of the Giants for winning in Judge’s first season.

But despite spending most of the year recovering, Barkley was able to get a good impression of his new head coach. He said as much when speaking to the AP Pro Football Podcast, where he spoke about his injury and recovery recently.

The conversation led to the subject of Joe Judge and Barkley’s initial impressions.

“When he came in and gave his speech, he let everyone know he was about business. When I first met him, I couldn’t stop looking at his eyes. It was like I was talking to a sergeant. And through time, when you got to see him, he got to show his personality, even through Zoom,” Barkley said.

“When I got hurt, I was trying to be this tough guy and stay strong in the locker room. And then I kind of started breaking down in front of him. He looked me in the eye and told me, ‘It’s going to be one hell of a story.’ And that’s the type of guy he is. He’s got your back and he’s a guy that’s for his players, and he’s a guy who is going to push you and get the best out of you no matter what.”

The difference between the Giants under Judge and the previous administration has been night and day. That seems clear with both player reactions and fan sentiment. There’s more reason to be optimistic going into next season than there was after Pat Shurmur’s first year as head coach. And for many of the young players on the Giants, last season was the closest they came to being on a winning team.

We haven’t gotten to see what Barkley can do under a new head coach and offensive coordinator yet – but that’s the hope for 2021. So far, it looks like Barkley will definitely be back on the field in week 1 barring a surprise setback.