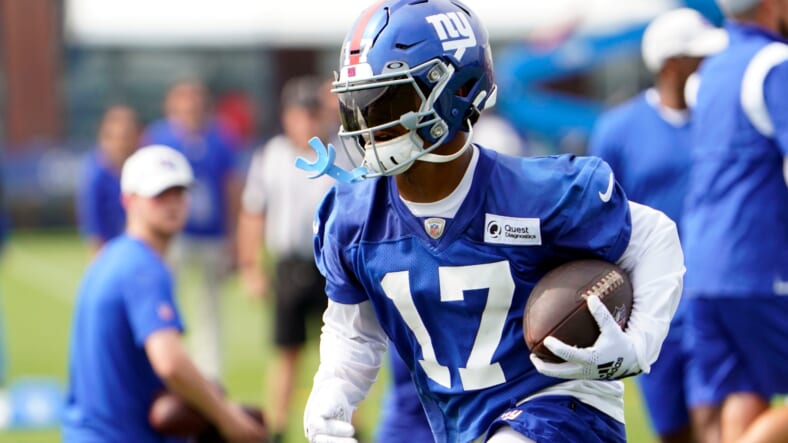 New York Giants rookie receiver Wan’Dale Robinson might have some of the smallest hands and wingspan coming out of the 2022 NFL draft, but he’s a feisty, versatile player who can offer a ton on offense.

He made the full-time transition to receiver in his junior year with Kentucky, hauling in 104 receptions for 1,334 yards and seven touchdowns. He also tallied 111 rushing yards on just seven attempts, good for 15.9 yards per carry.

The Giants are going to utilize him in a myriad of ways, as an RB but also a playmaker who can curate yards after the catch, similar to Kadarius Toney.

In an interview with Ed Valentine of Big Blue View, Robinson spoke about how the Giants have started to utilize him on offense:

“Some of the practices here I lined up in the backfield just going back to that stuff I did at Nebraska, and I’m doing stuff that I did at Kentucky, so it’s really like a mixture of everything. It’s been really good just to know that all the stuff I did in college has really got me prepared for this point.”

The Giants have big plans for their rookie WR:

With head coach Brian Daboll and former Kansas City offensive assistant Mike Kafka taking over offensive responsibilities for the New York Giants, the scheme is expected to receive a major overhaul. Going from a Jason Garrett led-unit that stalled on nearly every drive, elevating the unit to a more progressive and analytically advanced system should improve every individual player.

Considering new management drafted Robinson, we should expect to see a healthy dosage of him as a rookie, especially with Sterling Shepard missing time due to a torn Achilles. Injury issues last year to the Giants’ primary playmakers hurt the team’s progression, but Robinson has a clean bill of health that should offer more usage.

In fact, earlier this week, the Giants had Toney in the wildcat formation at quarterback with Saquon Barkley and Robinson alongside him. Getting creative is essential to success in today’s NFL, and Robinson can wear many different hats for this offense.