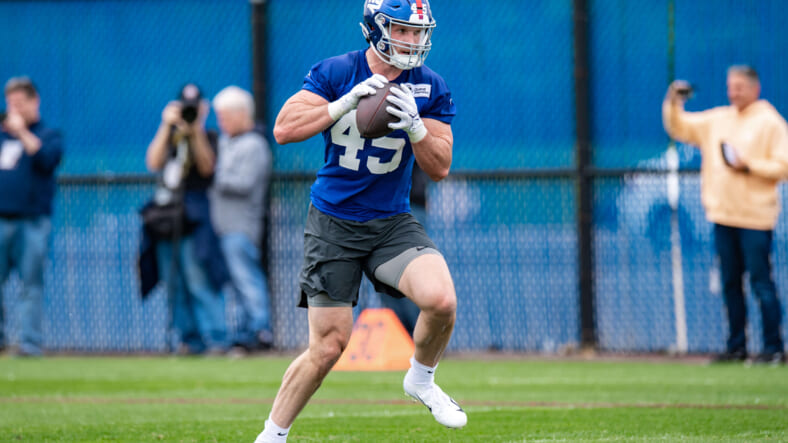 The New York Giants preseason opener is Thursday night at home against the New England Patriots. The Giants released their first unofficial depth chart of the season ahead of this game. Among the list of usual suspects were some surprises. Three rookies were listed as starters on the offensive side of the ball: Wan’Dale Robinson, Evan Neal, and Daniel Bellinger. First and second-round picks are typically expected to start early in their careers. But it is exciting to see a fourth-round draft pick in Daniel Bellinger crack the starting lineup.

Tight end is a position of weakness for the New York Giants. 2021’s starter Evan Engram left in free agency and the Giants also decided to move on from last year’s two backup tight ends, Kyle Rudolph and Kaden Smith. New GM Joe Schoen had to step in and rebuild the Giants’ tight end room from the ground up. After picking up a couple of proven veterans, it seems like Schoen’s gamble on a rookie tight end might be the most rewarding acquisition.

What Daniel Bellinger is bringing to the Giants’ starting lineup

Daniel Bellinger is listed as the first-team tight end on the New York Giants’ first unofficial depth chart. The Giants drafted Daniel Bellinger in the fourth round with the 112th overall pick in this year’s NFL Draft. While it might be unusual for a mid-round rookie to start from day one, Bellinger has the talent to do so.

The New York Giants are getting a sure-handed, tenacious run-blocker in tight end Daniel Bellinger. According to Pro Football Focus, Daniel Bellinger had 94 positively graded run blocks since 2019, ranking first among MWC tight ends. He also posted a 4.2% career drop rate during his collegiate career. Bellinger was underutilized in San Diego State’s offense, but the way he was featured in the offense makes him a perfect fit for Mike Kafka and the Giants’ offense.

Daniel Bellinger is an athletic tight end with a well-rounded skillset. The rookie measures in at 6-foot-6, 225 pounds. He moves quickly with the ball in his hands and has the power to push defenders in the running game. In 2021, Daniel Bellinger totaled 31 receptions, 357 yards, and 2 touchdowns.

SDSU TE Daniel Bellinger offers good yards after the catch ability, taking the screen pass to the house. Forced the initial missed tackle and it was nothing but grass. #TogetherBlue #NFLDraft pic.twitter.com/pvxQwG00Rd

Bellinger was utilized frequently on screens and short passes during his collegiate career. Over in Kansas City, Mike Kafka and the Chiefs turned Travis Kelce into one of the NFL’s best tight ends using him in a similar fashion to the way San Diego State used Daniel Bellinger. Expect to see the Giants give Daniel Bellinger opportunities to make plays in space as a rookie.