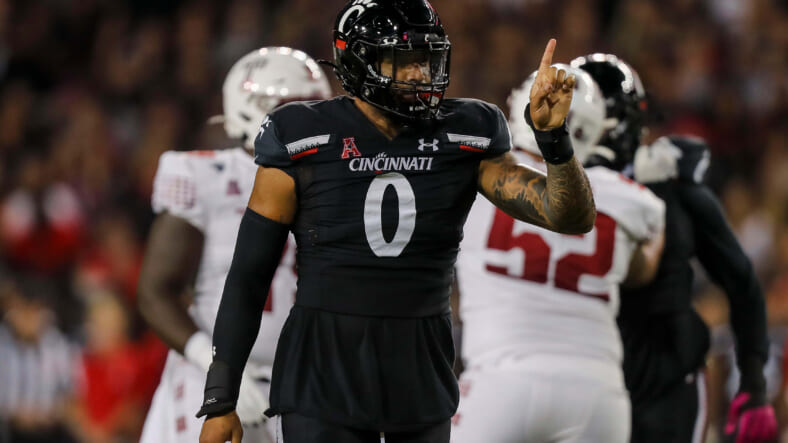 The New York Giants had the 21st-ranked defense in football last year. They enter this season with some big, new leaders headlined by Don “Wink” Martindale and Kayvon Thibodeaux. For the Giants to make progress and finish closer to their 2020 ranking of 12th, they will need some more new breakout players.

With the Giants being cap strapped this offseason, general manager Joe Schoen made most key additions in his first offseason through the draft.

Beavers joins the Giants with a wealth of college experience. He was a core contributor to the defensive and team success Cincinnati had in 2021. The rookie linebacker possesses a big, tall frame, just under 6-foot-4 and 255 pounds. To boot, Beavers tested well athletically. He has explosiveness and quickness.

He was selected by the Giants in the sixth round. Beavers supposedly gave the Giants some contributions stopping the run in practice earlier today. If the big, physical linebacker can carve out a role defending the run, it would be a great start for the 23-year-old rookie.

Yusuf Corker making the most of opportunity:

The depth at safety for the Giants is currently up for grabs. With rookie Dane Belton suffering a recent injury, the main players after starters Xavier McKinney and Julian Love are unknown.

One player with the opportunity to prove himself is undrafted rookie Yusuf Corker.

Corker spent his five years of college playing at Kentucky. He does not have special athletic ability or foot speed. He is, however, a stronger, more physical safety with some size. Corker is a tough football player who can help the Giants run defense.

During today’s practice, Corker reportedly made one good stop against the run. Building on that would be ideal for the undrafted first-year player.

The Giants need all of the young contributors defensively possible. Continued development from a day-three pick in Beavers and rookie free agent in Corker would be an added bonus in the early going under Schoen.