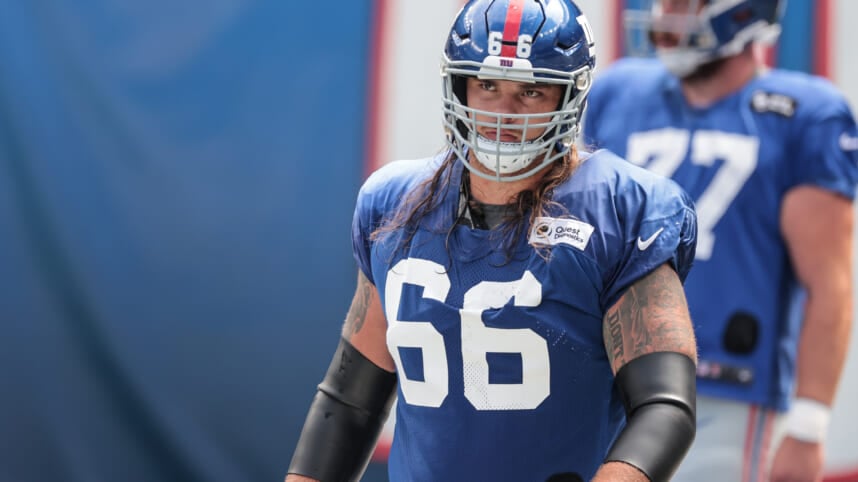 The New York Giants lost two starting offensive linemen against the Jacksonville Jaguars in Week 7. Rookie right tackle Evan Neal and left guard Ben Bredesen both picked up individual knee injuries, so the Giants had to supplement against the Seattle Seahawks in Week 8.

Rookie Josh Ezeudu and former third-round pick Tyre Phillips took over to supplement the injuries, with both struggling in pass protection. The Giants’ offense simply couldn’t stand their ground without their primary run blockers and tight end Daniel Bellinger all out. However, the team is preparing to get some reinforcements, with third-year guard Shane Lemieux being activated off injured reserve.

Lemieux had been dealing with a nasty toe injury that has held him out for quite some time, barely being able to play during the off-season. Lemieux played in just 17 offensive snaps last year before partially tearing his patellar tendon, forcing him to miss the rest of the campaign.

The 25-year-old last played a full season in 2020 when he was a rookie, giving up five sacks and 25 total pressures. He played the majority of his snaps that left guard, finishing with a 16.9 pass-blocking grade, per PFF.

The New York Giants need help and Shane Lemieux can provide it:

Having activated him off IR, the Giants have 21 days to determine if he will join the roster or if they will shut him down for the rest of the season. Recently, the team brought back Nick Gates, who has made a small but noticeable impact coming off a potentially life-changing leg injury.

Lemieux has his work cut out for him with Ben Bredesen locking down the LG spot. Bredeson has been polarizing in pass protection this year for the most part but has been a fantastic run blocker, which has helped Saquon Barkley resurrect his career.

Bredeson is coming off two solid games against the Baltimore Ravens and Jaguars (smaller sample size of 16 snaps against Jax). He posted an 87.4 pass-blocking grade against Baltimore, his former team. His relative success has put him in an advantageous spot, but the team placed him on injured reserve, so he will be eligible to return in two weeks.

In the meantime, expect to see plenty of Ezeudu at LG while Lemieux fights his way back into the mix.