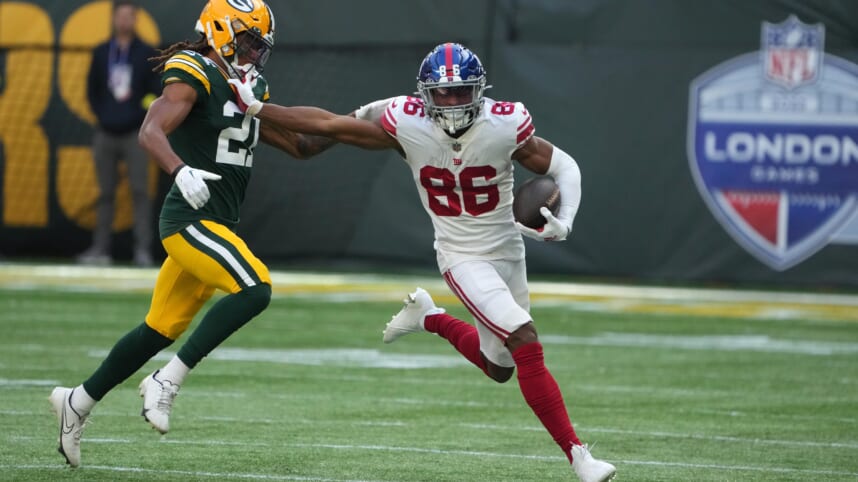 The expectation was that star running back Saquon Barkley would be the focal point on offense, but the Giants didn’t hesitate to unleash Daniel Jones in the passing game, completing 21 of 27 attempts.

Surprisingly, the Giants’ leading receiver in the win over Green Bay was Slayton, a fourth-year receiver out of Auburn. Having played 0% of snaps in Week 1, 5% in Week 2, 19% in week 3, and 60% in Week 4, he finally managed to make a significant impact. Over 54% of snaps against the Packers, he hauled in six receptions on seven targets, good for an 85.7% catch rate and 79 yards.

The New York Giants are figuring out how to utilize Darius Slayton:

After enjoying a stellar rookie season under the leadership of Pat Shurmur, recording 740 yards and eight touchdowns, the Giants never really figured out how to utilize him. However, new offensive coordinator Mike Kafka and head coach Brian Daboll put together a perfect strategy to maximize his speed downfield.

Instead of simply running him on go-routes, they had Slayton run a significant number of crossing routes, pulling all the receivers across the field in the opposite direction to drag defenders out of position.

After taking a significant salary cut to stick with the team, Slayton was betting on himself despite not receiving much playing time during the first few weeks of the season. With injuries mounting, Daboll continued to keep him on the bench but finally offered him a perfect opportunity to resurrect his season and potentially his career in a contract campaign.

Slayton is the epitome of professionalism since he refused to complain about a lack of playing time and did the team a big favor by reducing his salary hit by over $1 million, offering the team solid depth at receiver.

Daboll predicates his strategy on opportunity and players rising to the occasion, which is exactly what Darius did in Week 5. Given his performance, expect the Giants to utilize him far more often, especially with a big matchup against the Baltimore Ravens in Week 6.