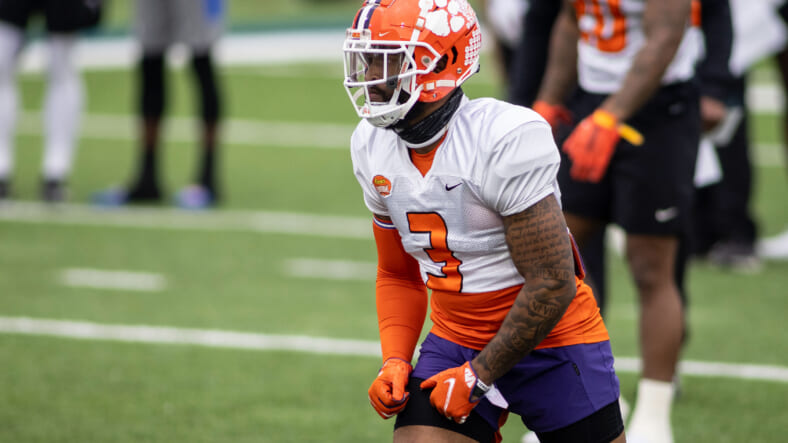 The New York Giants spent big in free agency this offseason to give quarterback Daniel Jones a competent stable of offensive weapons. New York gave Kenny Golladay a massive contract to be the Giants’ new alpha dog receiver. They also signed Kevin Rudolph to be a reliable tight end with the ability to make plays in the red zone.

But many get the sense that the Giants are not done adding playmakers this offseason. With three weeks until the 2021 NFL Draft, many still believe that the Giants will spend their first-round pick on an offensive weapon if the right one is on the board. But even if New York goes another route in round one, there are plenty of options on offense for them to consider adding in the middle rounds.

UNC’s Dyami Brown is an intriguing option for the Giants to consider. This 6-foot-1, 185-pound wide receiver has drawn comparisons to Giants route technician Sterling Shepard. Dyami Brown is a dynamic outside wide receiver that racked up over 1,000 receiving yards in back-to-back seasons for the Tar Heels.

Brown’s draft stock has him projected to go in the second or third round of the draft. Dyami to the Giants in round three would be an absolute steal if he falls to them. But taking him in round two is a safe bet. Primarily playing the X receiver role in college, Dyami Brown is an outside, vertical threat that has elite upside. He does not have any slot experience, but his skill set of great route running and physicality could translate and allow him to thrive in that role at the next level.

Dyami Brown is a playmaker. He hauled in 20 touchdowns over his final two collegiate seasons. Per Pro Football Focus, Brown averaged 3.11 yards per route run last season, 14th among 68 qualifying draft-eligible wide receivers. Dyami is an intriguing wide receiver prospect that could turn the New York Giants’ offense into a dominant machine.

Brevin is an undersized tight end that is a dynamic matchup weapon. But his Pro Day left a lot to be desired as Jordan’s RAS score came back at a lowly 4.52 out of 10. This is concerning considering many viewed Jordan as more â€œbig athleteâ€ than an actual tight end.

Brevin Jordan’s disappointing Pro Day could indicate a few things. It could indicate a fall in draft stock, causing him to slip and be a solid value selection for the Giants in the later middle rounds. But it could also indicate that Brevin is not the athlete many thought he was, or that he was not able to keep himself in shape and train properly for his Pro Day. If Jordan does have athletic or training problems, he could struggle to make it in the NFL. But there was enough electric play by Brevin Jordan during his collegiate career to make him a valuable mid-late-round pickup for any NFL team.

The New York Giants cut veteran Golden Tate this offseason to save salary cap space. In the 2021 NFL Draft, the Giants could replace Golden Tate with his clone in Amari Rodgers. The two wide receivers have a near-identical playing style, a style that Daniel Jones greatly enjoyed playing with during his 2019 rookie season.

Golden Tate was a YAC king with a shorter body and a stocky frame. Amari Rodgers is in many ways the same. He has a running back build paired with quality route-running skills and an impressive catch radius for his size. Amari Rodgers thrived in 2020 as the primary receiver in Clemson’s explosive offense, racking up 1,020 receiving yards and 7 receiving touchdowns.

Amari Rodgers’s draft stock has hovered around the third or fourth round. Despite finding great success in an SEC offense, many have questions regarding Amari’s frame and how his skill set will translate to the NFL. Some have suggested that Amari moves to running back at the next level. But as a low-cost player for the Giants to take a flier on in the middle rounds, it is hard not to see the young Golden Tate similarities and fall in love with Amari Rodgers’s fit in New York.