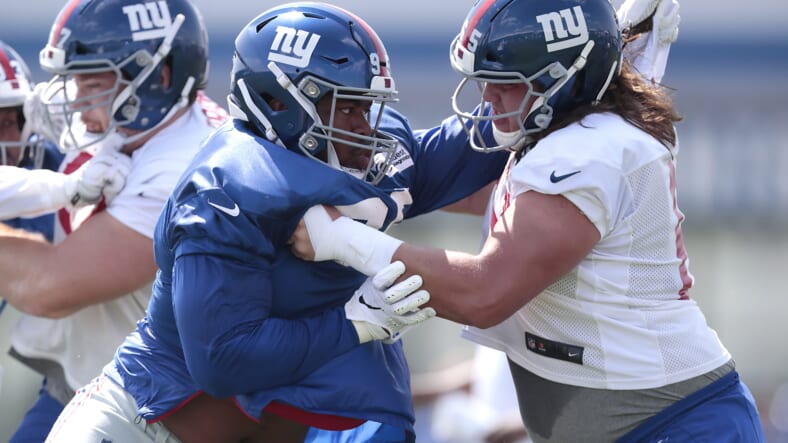 The New York Giants have been arguably the weakest unit on the team through its disappointing 0-3 start. After investing a fair amount of assets into the offensive line this offseason and acquiring one of the best positional coaches in the sport to guide them, the Giants’ offensive line appears to have somehow gotten worse in 2020.

Quarterback Daniel Jones has been under pressure on 41.5% of his dropbacks in 2020, according to Pro Football Focus. This is the third-highest rate in the NFL. PFF Also states that the Giants’ offensive line has recorded a 46.3 pass-block grade through three weeks, ranking dead last in the league.

The members of the Giants’ front line are not oblivious to their poor performances. According to starting center Nick Gates, the Giants’ offensive line is “pissed off.”

The New York Giants’ offensive line has gone up against some of the best defensive lines in the NFL to start the season. The Steelers and Bears were fully healthy and had All-Pro pass-rushers line up against the Giants’ weak offensive line. The 49ers’ defense was injured, but well-coached with a few impact players that gave the Giants plenty of trouble.

Entering Week Four, the Giants are set to face off against another great defense featuring one of the game’s greatest players: Aaron Donald. When asked about this matchup, Nick Gates called the matchup “exciting,” and saying Donald “will be the best player” Gates has “ever gone up against.”

Nick Gates admits that these first three weeks have been “frustrating” and the team is “pissed off.” But he also recognizes that the team has to “focus on the Rams” and move on “to the next game.” This falls in line with Joe Judge’s quotes.

Offensive line coach Marc Colombo also spoke with the media as his unit continues to struggle. Colombo is aware that his line is frustrated, saying, “I love that they’re pissed off. That’s the type of group we want.”

As frustrated as Colombo and his unit are, they are also aware that they have been dealt a pretty bad hand in 2020. With the craziness of the COVID offseason, Colombo reminds the media that the Giants’ offensive line is “thousands and thousands of reps behind.” Continuity has also been a problem for the Giants. But Colombo is not here to make excuses. Instead, he is here to find solutions:

â€œWeâ€™ve gotta do better in the run, period. Thatâ€™s where weâ€™re falling short right now. Itâ€™s going to alleviate a lot of stuff in the passing game. Thatâ€™s something we have to do.” – Marc Colombo on his offensive line’s play through three weeks of the 2020 NFL season

Clearly, the Giants’ offensive line and coaches are frustrated. They need to play and coach better and they are all aware of that fact. If New York wants to turn around its season, the offensive line will need to improve quickly and drastically.