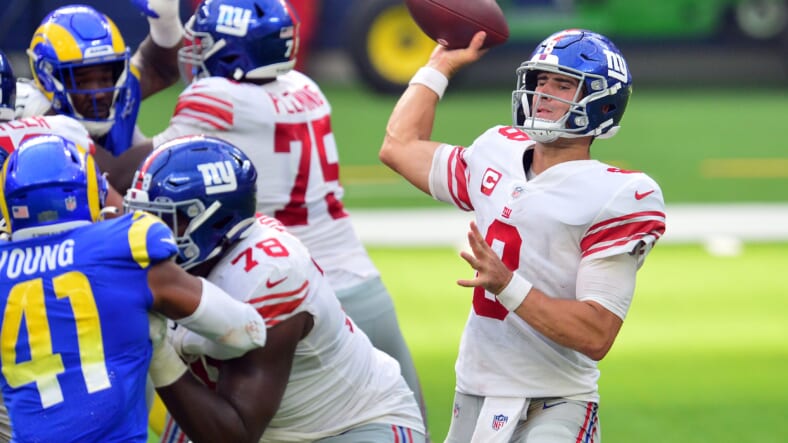 The New York Giants have made extensive efforts to upgrade their offense while also bolstering the defense this off-season. In free agency alone, they added several players who can help contribute toward a winning season in 2021, including the likes of Kenny Golladay and Adoree Jackson. With the NFL draft in less than a month, the Giants have more ammo and resources to allocate, which should help some of their individual players improve in the near future.

Take a look at breakout candidates for the New York Giants:

If thereâ€™s any player that desperately needs a breakout season, it is quarterback Daniel Jones. After posting 24 touchdowns in his rookie season, Jones saw that number slash by more than half to just 11 under Jason Garrett. Unfortunately, he didnâ€™t have Saquon Barkley and a plethora of playmakers, but the Giants are looking to give him everything he needs to succeed moving forward.

Adding Golladay, a bonafide wide receiver one, and John Ross, we should expect Jones to play a bit more efficiently. In addition, he will have a healthy Saquon Barkley, and the Giants could use the 11th overall pick on another play-maker.

Ultimately, there is no excuse for Jones not to have a better 2021 performance, and the Giants desperately need to see improvement if they want to commit to him as their franchise quarterback moving forward. Looking at a bit more of his statistical output, Jones is deadly accurate when throwing the ball downfield. I expect the Giants to take a more vertical approach to their offense, which is what sold Golladay on joining Big Blue, and the presence of Ross also suggests a more vertical strategy.

When throwing the ball 20+ yards downfield, Jones threw six touchdowns and zero interceptions, so adding more deep threats is exactly what the Giants set out to do, and they accomplish that goal in free agency.

One player I believe will have a stand-out 2021 season is Dexter Lawrence, and with the absence of Dalvin Tomlinson after signing with the Minnesota Vikings, the Giants need Big Dexy to take a step forward.

Last season, Lawrence finished with 37 tackles, four sacks, and 33 stops. He was one of the most double-teamed interior defenders in the NFL, and with two seasons under his belt, a year-three breakout season should be expected.

I believe his knowledge of Patrick Grahamâ€™s scheme and the retention of Leonard Williams should assist in his production, and I think the Giants want to see him take more of a pass rusher role from the 3-tech position, where he can pressure the interior and get after the quarterback adequately.