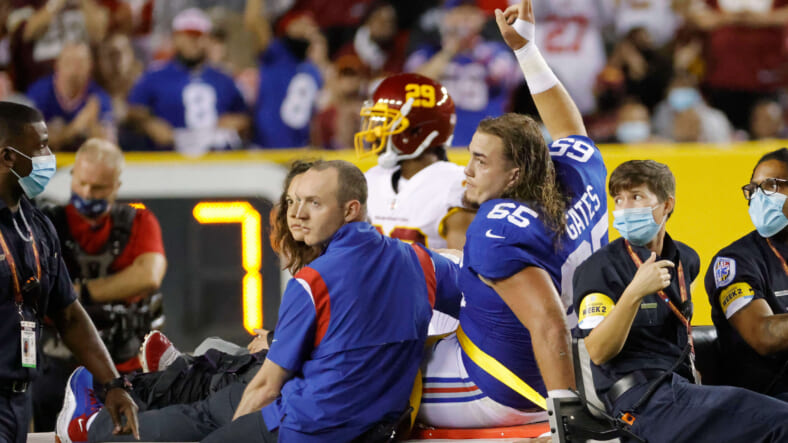 It’s still the early season, but it looks like the New York Giants already experienced their biggest injury of the year. That injury is the one that sidelined center Nick Gates, who was announced as a captain this season only to fracture his leg weeks later in the loss to Washington. Gates is obviously out for the season, but his future beyond this year remains an unknown.

That’s not something that head coach Joe Judge is willing to dance around and avoid. When asked about the injury by reporters, Judge couldn’t bring himself to deny the possibility of the injury threatening Gates’ career.

“I’d be lying, from my perspective, if I said no. I know there’s comparisons to other players, these things are all different. I know he’s going to have the best medical care possible… So we’re confident he’s going to be able to come back. My fear, for any guy who has something like this, is yes, it can be career-ending,” Judge said.

Gates underwent surgery the day after his injury, but that only marks the beginning of a long recovery process. It’s the next step in an up-and-down career that saw Gates enter the league as an undrafted free agent before becoming a solid starter in 2020 and a team captain in 2021.

This isn’t the first time Gates has dealt with injury problems. He spent his rookie season on the injured reserve, which is part of why his rise seemingly came out of nowhere after an uneventful start to his career. But his time on the injured reserve as a rookie wasn’t due to as major an injury as this.

Gates will have no shortage of encouragement from the fans and from teammates as he recovers from the worst Giants injury in recent memory, but at the end of the day, it’s impossible to put a date on when he could come back.

It’s too early to project that, and the only option for the Giants offensive line right now is to keep moving forward without knowing when one of their leaders could return to the mix.