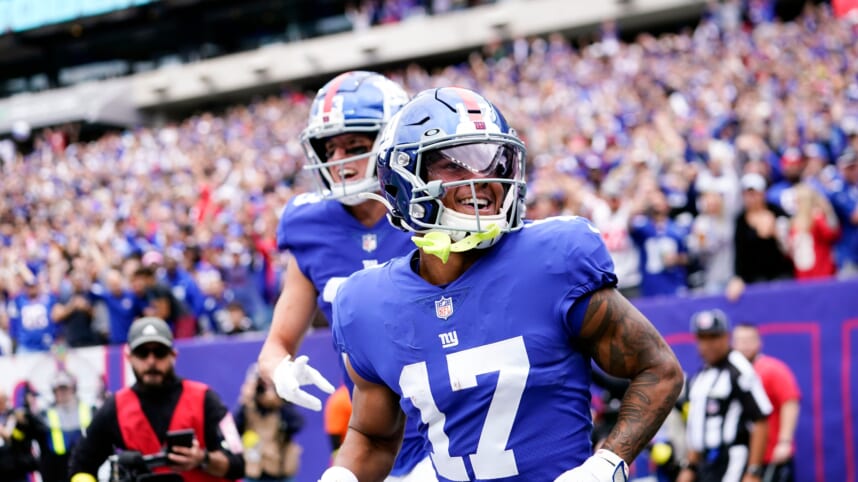 New York Giants wide receiver Wan'Dale Robinson (17) scores a touchdown against the Baltimore Ravens in the first half at MetLife Stadium on Sunday, Oct. 16, 2022. Nfl Ny Giants Vs Ravens

The New York Giants defeated all odds once again against the Baltimore Ravens in Week 6, emerging victorious 24–20. Having beaten the Green Bay Packers and Ravens in back-to-back games, the Giants are currently on an impressive winning streak marked by just one loss against the Dallas Cowboys in Week 3.

While the team has defeated all odds, the Giants are getting healthier, indicating their best performance may be down the road. Against Baltimore, they returned both Leonard Williams on the defensive line and rookie receiver Wan’Dale Robinson, who immediately made his impact felt.

Robinson has been rehabilitating from an MCL sprain he sustained in Week 1 against the Tennessee Titans, finally making his second NFL appearance. Having played just 23% of snaps on Sunday, Robinson still managed to haul in three receptions for 37 yards and a touchdown. The Giants showed glimpses of his impact in the red zone during training camp, utilizing him in that area specifically.

In a bunch formation on the left side of the field, the Giants had Robinson run a delayed flat route, getting him the ball with plenty of space to work with, scoring easily untouched into the end zone.

That was the very first moment Giants fans realized why head coach Brian Daboll and general manager Joe Schoen selected Robinson as a second-round pick out of Kentucky. He’s not only a gadget player, but he can be a legitimate receiving threat, despite his tiny frame and small wingspan. Quarterback Daniel Jones is a relatively accurate quarterback, meaning Robinson will have opportunities to catch the ball within his radius routinely.

Having played such a small number of snaps against Baltimore and seen such a significant impact, the Giants should expect him to increase his production and efficiency moving forward, especially after escaping Week 6 unscathed and healthy.

However, Robinson wasn’t the only rookie to get involved in the passing game. Tight end out of San Diego State, Daniel Bellinger also made a significant impact, helping in the run-blocking department but also recording the third touchdown of his NFL career.

Considering how poor the Giants were in 2021 in the red zone, they’ve completely flipped the script, sitting in the top 15 regarding red-zone efficiency.