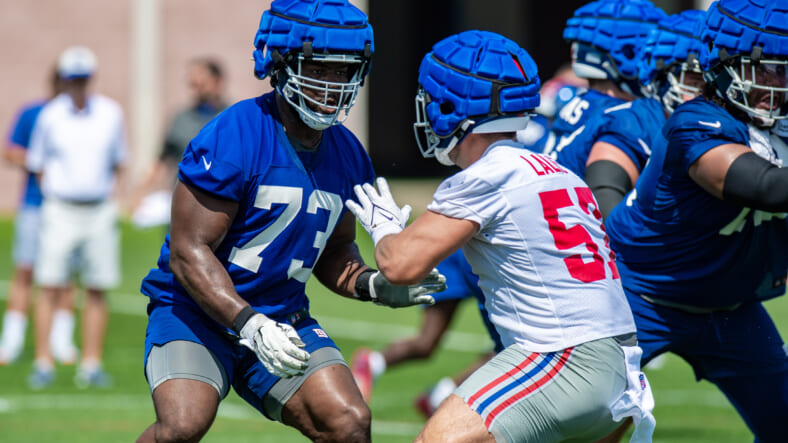 The New York Giants rebuilt their offensive line this off-season, starting with Mark Glowinski’s signing and Evan Neal’s drafting with the 7th overall pick. Those were the two primary acquisitions, but they added more competition to center and left guard, including Jon Feliciano, Max Garcia, and Josh Ezuedu.

The Giants also brought in reserve offensive lineman, Matt Gono, formally of the Atlanta Falcons. Gono didn’t play during the 2021 season, with his last action coming in 2020.

However, the team announced on Wednesday after practice that the 26-year-old had been placed on the exempt/left squad list. According to Dan Duggan of The Athletic, Gono was placed on the list due to an undisclosed physical issue, which he will be seeking treatment for.

From what I've gathered, this is related to an undisclosed physical issue. Gono is scheduled to see a doctor tomorrow, so there should be some clarity after that. https://t.co/RNYuWEDjwX

Gono projected to be a swing tackle for the Giants moving forward, after missing 2021 with a neck injury. During his last season of action with Atlanta, he allowed one sack and 16 pressures over 336 total offensive snaps. Gono had several quality games as a pass protector at right tackle, but he also has experience at left tackle, right guard, and left guard.

In his absence, the Giants will continue shifting a few linemen around, including Ben Bredeson and Shane Lemieux, both of whom have been earning snaps at center the last few practices.

It’s possible that Gono makes a return to the team after his injury is treated, but for now, the Giants will keep pressing forward.