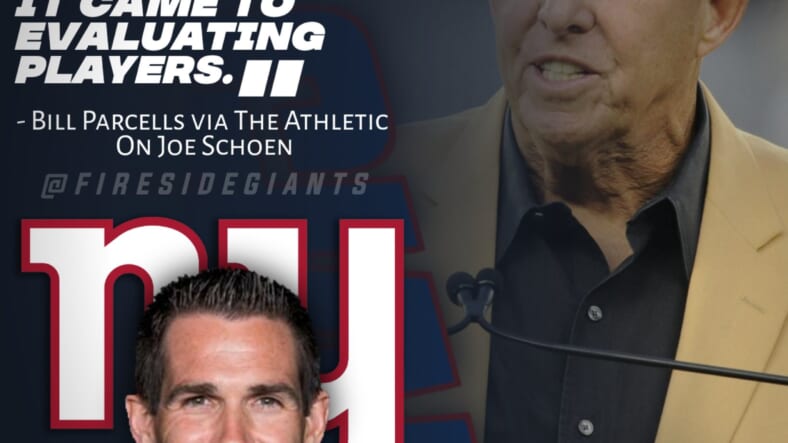 The New York Giants have finally been relieved of the Dave Gettleman era. The team’s now-former General Manager announced his retirement this Monday, leaving the Giants with a vacancy in the front office. New York has acted quickly, though, requesting to interview a slew of strong general manager candidates. Joe Schoen, the assistant GM of the Buffalo Bills, “might be the one to beat” for the Giants’ GM job, according to Ian O’Connor of the NY Post.

Joe Schoen is an excellent talent evaluator that has worked in some of the best front offices in the NFL. He has worked as the right-hand man to Bills general manager Brandon Beane since 2017. Prior to his time in Buffalo, Joe worked in the scouting department for the Miami Dolphins.

During his time in Miami, Joe Schoen briefly worked under the great Bill Parcells. Parcells, a Hall of Fame head coach and two-time Super Bowl champion with the New York Giants, had great things to say about Joe Schoen when asked.

What Bill Parcells had to say about Joe Schoen

“I was impressed with Joe because he was a sharp guy and he had a good thought process when it came to evaluating players.” – Bill Parcells via The Athletic

By all accounts, Joe Schoen is an extremely hard worker. The Buffalo Bills’ assistant GM rose through the ranks, beginning his career as an intern in the Carolina Panthers’ ticket office in 2000. It was as a scout in Carolina that Schoen caught the attention of Brandon Beane. Beane worked in the Panthers’ front office from 1998-2016. Upon making the move to becoming a scout in Miami, Schoen grabbed Bill Parcells’s attention, too. Beane and Parcells have both praised Joe Schoen for his work ethic and talent evaluation.

For a more comprehensive breakdown on Joe Schoen, check out the video below and subscribe to Fireside Giants for more NYG news and content: