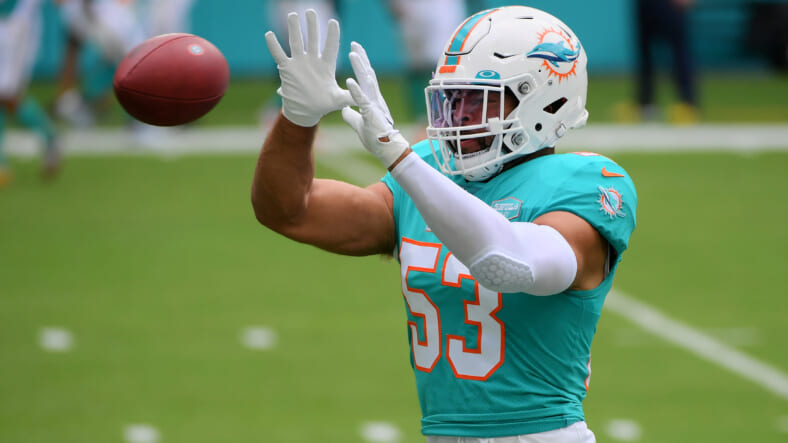 The New York Giants are preparing for a crucial free agency period this offseason. New York has made it known that they are in the market for new offensive playmakers. The defense was the strength of the team in 2020 while the offense fell behind, averaging only 17.5 points per game.

But that is not to say that the Giants’ defense was perfect by any means. The Giants did a good job generating interior pressure and had an impressive trio of safeties combined with some 2020 free agency standouts in Blake Martinez and James Bradberry. There was one position, though, that the Giants were lacking consistent production out of.

The New York Giants did not have a consistent presence pass-rushing off the edge in 2020. They ran with a rotational pass-rush that saw numerous players start as edge rushers. Lorenzo Carter and Oshane Ximines were solid edge players when healthy, but when they went down, New York had a revolving door at edge rusher.

Today, a new edge rusher entered the free agency market. The Miami Dolphins cut Kyle Van Noy after one season with the team to save themselves over $9 million in salary-cap space. Van Noy is an intriguing player that the Giants should keep an eye on as they approach free agency.

After one season in Miami, Kyle Van Noy is once again a free agent. Van Noy spent the first four years of his career with the New England Patriots before playing in Detroit with the Lions for three years. In 2020, Van Noy was a free agent searching for his third team. He ultimately landed in Miami but did praise the New York Giants and their new head coach Joe Judge earlier in the process.

Kyle Van Noy has familiarity with Joe Judge from their days with the New England Patriots. Last offseason, Van Noy was a guest on the Pat McAfee Show. He praised Joe Judge, referring to him as a “ball of energy,” and even said, “Go, Giants!” towards the end of his interview. Now that he is once again a free agent, Van Noy could be a potential fit with the New York Giants.

Kyle Van Noy is an eight-year NFL veteran that has played a versatile role throughout his career. He might not fill up the stat sheet, having a career-high of only 6.5 sacks in a season (2019). But Van Noy is one of those guys that generates a lot of hidden production.

According to Pro Football Focus, Van Noy tied third among non-defensive linemen in pressures with 28 in 2020. Kyle Van Noy is an edge rusher, but he is also an off-ball linebacker. He plays a variety of defensive alignments and performs well at every one of them. If the Giants sign Kyle Van Noy, he could potentially fill two needs for them. Van Noy would contribute to the Giants’ pass-rush and he would also be able to plug in as a solid off-ball linebacker next to Blake Martinez.

The Giants utilize a complex, versatile defense under Patrick Graham. In 2020, New York sent plenty of creative blitzes. Kyle Van Noy might fit perfectly in this scheme as a player who can rush from anywhere on the field. Additionally, his familiarity with the coaching staff could connect him to New York.