New York Giants: Kyle Rudolph’s return to the lineup could be huge for Evan Engram 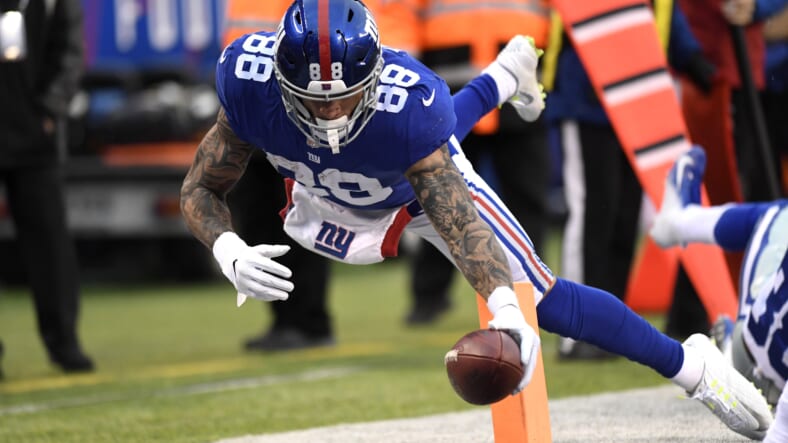 The New York Giants had an eventful day of practice on Wednesday. They saw a couple of key starters go down with injuries (seemingly nothing significant, though). But they also got a crucial member of the offense back from injury. Kyle Rudolph was activated off the PUP list and returned to practice.

Kyle Rudolph is a phenomenal red zone threat and reliable tight end that can do it all for the Giants’ offense. Rudolph was part of the Giants’ big offensive spending spree in free agency this offseason. New York made it a priority to upgrade their offense that ranked 31st in the NFL last season. Kyle Rudolph will enter the Giants’ lineup, not as a full-time starter, but as a complementary piece to Evan Engram. The addition of Rudolph into the lineup could be huge for Engram as he takes his game to the next level.

Why Kyle Rudolph might unlock the next level of Evan Engram

Evan Engram made the Pro Bowl last year, despite having a season most fans want to forget. The dynamic tight end dropped 11 passes last season, some of which came at crucial moments and cost his team games. But there are reasons to believe Engram will bounce back in 2021.

Engram is best used as a deep-receiving weapon. When going vertical, Evan Engram can be a true playmaker. He and Daniel Jones connected on a few deep bombs last year, including two 40+ yard receptions against the Cincinnati Bengals.

However, the majority of Engram’s routes were run underneath, not vertical. 69 of Evan Engramâ€™s 109 targets came between 0-10 yards of the line of scrimmage. Only six of his targets were on passes 20+ yards downfield (PFF).Â Evan Engram is one of the fastest tight ends in the NFL. It is malpractice for him to be used purely on hook routes five yards from the line of scrimmage. Let Engram put that 4.42s 40-yard dash to work and get downfield. The addition of Kyle Rudolph in the lineup will allow Engram to do just that.

Kyle Rudolph has not dropped a pass in the last two years and is incredible at making contested catches. Rudolphâ€™s contested catch rate since 2016 is 51.9%. Compare this to Evan Engramâ€™s career contested-catch rate of 32.1%, and itâ€™s easy to understand why Kyle Rudolph could be one of the Giantsâ€™ most valuable offensive weapons.

In the Giants’ 2021 offensive scheme, Kyle Rudolph will be able to do the things that Evan Engram struggled with during the 2020 season. Rudolph can run all of those routes from 0-10 yards of the line of scrimmage that Engram failed to run efficiently. Having Kyle Rudolph as the reliable pass-catcher underneath will allow the Giants to play Evan Engram to his strengths, pushing him downfield as a vertical receiving threat and putting together explosive plays.