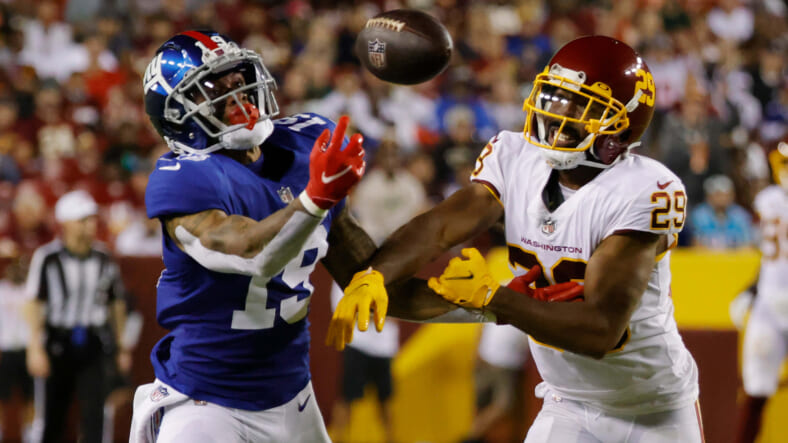 One of the most talked about moments during the New York Giants‘ week 2 loss to Washington didn’t happen on the field. Rather, wide receiver Kenny Golladay would put attention on himself while on the sideline when he appeared to have an emotional outburst at either Daniel Jones or Jason Garrett. Jones would quickly stand up for Golladay in his comments after the game, but many still wondered about the situation and whether Jones was simply saying what was good for public appearances.

However, Golladay himself also claims that the burst of emotion on the sideline wasn’t directed at his quarterback. When asked about it on Monday, he said that it was aimed towards Jason Garrett and also denied the incident was over a lack of passes headed his way in big moments.

What did Golladay have to say on the matter?

“No, not so much that,” Golladay said when asked if his message was to get him the ball more. “Pretty much just me talking to JG a little bit and thatâ€™s two competitive guys right there. Moreso, just me wanting to do anything I can. Not so much, â€˜Give me the ball more,â€™ though.”

“No, itâ€™s not dealing with that,” the receiver further elaborated when asked if it was about mainly being thrown the ball on early downs.

Golladay was targeted 8 times but only had 3 receptions in the loss. His 38 yard performance was a step down from week 1 and served to fuel calls for the Giants to use their top weapons better.

While the sideline outburst brought some initial concern from the fanbase, many will be willing to look past it after learning it was directed towards Jason Garrett – Garrett, after all, has proven to be one of the least popular figures around the Giants this season.

With the way the season has started for the Giants’ new additions at receivers, it’s not that surprising that some frustration managed to come out towards the offensive coordinator. One can only hope that the offense continues to build on its improvements from the Washington game and that there’s no need for moments like this later in the season.